The Super Hero and Princess Epidemic 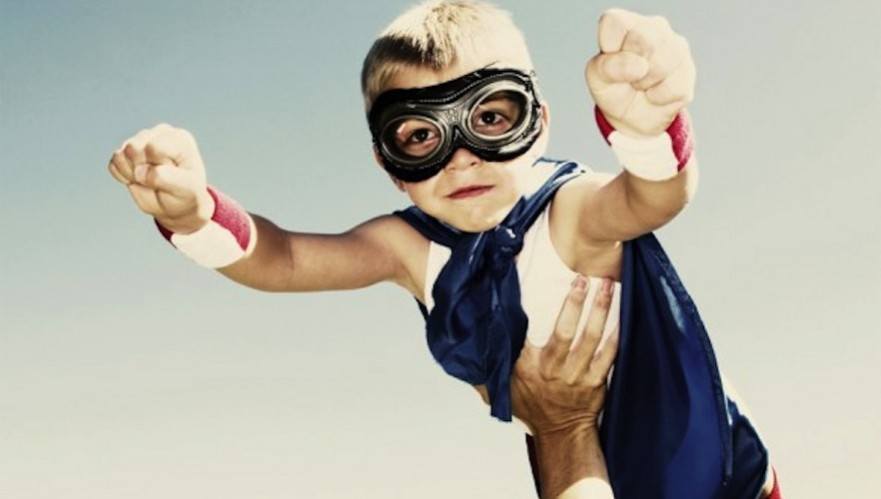 As the mom of a 4 year-old boy who loves nothing more than dressing up every day as a different super hero and imagining elaborate worlds filled with battles between good and evil, I wrestle with the ideas in this article all the time. Should I have said “no” when my husband pridefully whipped out his old set of Star Wars action figures and got this whole obsession off to an early start?? Should I now try to guide this sort of play in a different direction? My son has never seen any of these shows or movies – he’s gotten to know these characters purely from the über present licensing on every product known to man. I wanted to keep him sheltered from all this for as long as possible (and I often cringe about it), but I also see how much he connects with it, how much joy it brings him and how much it gets his inspirational juices flowing. And it’s the world we live in. I don’t know, it’s a real debate for me and so many moms I know. Gina Osher, insightful scribe of The Twin Coach blog, weighs in on what she calls “The Super Hero and Princess Epidemic.” Where do you stand in the debate? Comment and let us know!

An essay by Gina Osher

After much thought, our preschool has recently decided to implement a dress code of sorts. Children will no longer be allowed to come to school with clothing , lunch boxes, costumes, etc. that have super heroes, princesses or media characters and images (video games, Spiderman, Star Wars etc). The school director’s purpose for this was twofold. In part, it was to promote imaginative and creative play in which the children can learn and develop, rather than to encourage imitative play. Also, she wanted to get a handle on the physically aggressive and emotionally mean behavior that was being exhibited, both by boys and girls.

Almost overnight, the positive effects of the new rule were seen. The children’s need to feel powerful isn’t gone; but instead of using gunplay and exclusionary play to achieve it, the teachers are able to help them process their feelings and channel their emotions without the shame of making them feel that what they are playing is wrong.

My husband and I didn’t offer television as an option to our kids until they were over three years old. We also purposely tried not to introduce Disney princesses, cartoon super heroes, or commercial toys for as long as possible. By doing this, we felt our children were allowed to develop their creativity and minds more uninhibitedly — they didn’t associate their gender with any pretend role. If they were a super hero, it wasn’t one whose powers were predetermined or developmentally inappropriate. Our son was perfectly happy to play princess or train captain – so was our daughter! Our children had no concept of who Batman or Cinderella was, and so would play dress up or pretend in a very different way than they did once those characters were introduced to them. Now that it’s happened, it’s not terrible; but I have noticed the difference in their behavior since this more informed type of play became more prevalent (and more important to them because their friends were doing it.)

In the past few months since school has started, our son has come home more than once talking about “bad guys” and having to “protect himself” or “kill” things. I know he’ll eventually understand what these words really mean and I will have to discuss them with him, but it would be my preference that at this age, he wasn’t asked to understand those concepts. I think that, perhaps, what parents who feel comfortable exposing their children to various types of movies/stories/videos don’t consider is how it much it affects the other children who interact with their kids. Some children are just much more sensitive than others and may not be able to handle knowing about the bad guys these Super Heroes fight or even why they are fighting. I have tried, instead, to allow my kids to create their own heroes with whatever powers they might imagine; Picasso the Super Rabbit was one the other day…. He painted the world bright colors and made everyone happy. It was interesting to me to watch a boy and a girl collaborate on this topic and then witness what they came up with. Without outside influence there was no gender stereotype and no aggressive imagery I had to work around.

Although the Super Hero stuff hasn’t taken a turn for the worse in our house yet, I am DEEPLY disturbed by the princess problem that has begun. Our daughter, who is not quite 3 1/2, has been telling me she “looks ugly” in some outfit, or that she won’t “look pretty” if she can’t dress like a princess. I know, in part, this concept comes from school. It’s not the only place of course, but when she tells me that girls at school have prettier clothes, it makes me wonder what’s going on. I know that at this stage she is not really feeling that she, herself, is not pretty; it is more about not having the language to express that she may think a dress she has on is not fancy enough or her clothes are too sporty for the mood she is in….but, for me, the princess issue has a more far-reaching problem than even super heroes do. I don’t want my daughter feeling that her looks are all that matters, or that growing up to have no goals other than to meet a prince is OK. Well-meaning friends buy her princess things for her birthday and it’s so easy to give in; princess stuff is pretty and not letting her play with it brings on the tantrums!

Like everything else about parenting, the easy way out is only good in the short term. It’s a bit like making the choice between fast food and a well-balanced, home cooked meal. One is easy and delicious, the other is time-consuming to prepare, and while it tastes good — maybe not as yummy as the greasy fries and burger. But, In the long run, making the hard choices and doing the hard work is how I see us being able to raise the compassionate, bright, self-assured well-adjusted children we know our children are capable of becoming.

So maybe letting my daughter have that Ariel costume wasn’t the end of the world, but if I don’t balance it out with showing her that there is so much more to life than pining away for a prince to kiss her, then I’ll feel like I let her down. If my son wants to be Superman at Halloween, I can live with it; but I also have to show him that there are many ways to feel powerful in this world and that he doesn’t have to worry about battling bad guys all the time. Being a parent is hard. Sometimes I think being a kid is a lot harder than we may remember.

Gina Osher is a former holistic healer and mom of boy/girl twins. Her popular blog is called, “The Twin Coach.” She’s spent the years since her children’s birth counseling, advising and supporting other mothers on everything from preparing for a twin birth to understanding the subtle differences involved in raising twins.