My Cancer and My Son 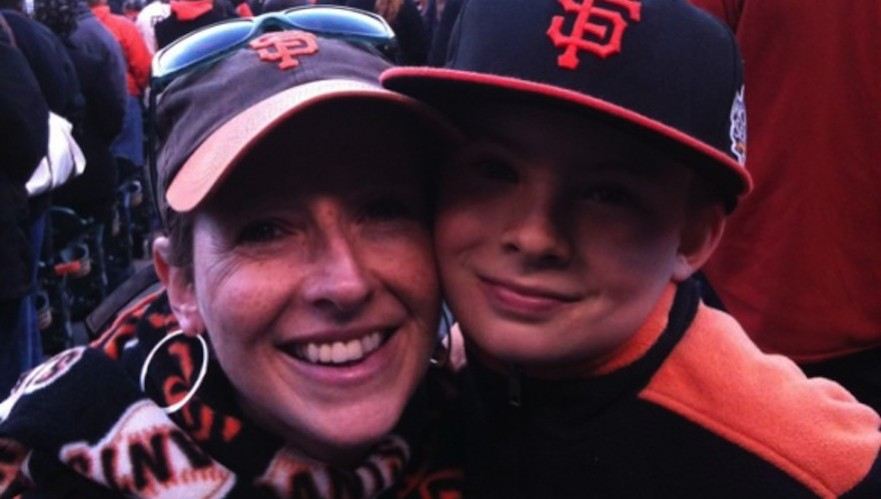 On the day before my mastectomy last June, I went to visit my Dad.  I wanted to give him a hug, to reassure him I was okay, and to see in his face that he believed I’d be okay.

When we said goodbye, the anguish in his eyes was unmistakable.  I said, “Dad, I’m going to be fine.  I’m not scared.  I’m in good hands. Please, don’t be scared.”  He gazed at me with his trademark gentleness, and said, “Sweetheart, if someone accidentally elbowed you, I’d be upset…and this is much bigger than that.”

In that moment, I realized in a whole new, visceral way, how much we suffer at the thought of our child suffering.

When I learned last May that I had breast cancer, I was dreading the pain and fear it would cause my boy Jack.   He already knew about cancer because my mother died of the disease 14 years before he was born.   I knew in his mind, he would make the association with his Grandma Bea, and imagine his mama might die, too.

My husband and I did not disclose the news of my diagnosis for a week or so, until we knew what the action plan would be.  Then, it was time to tell our son.  On a sunny Sunday afternoon, we sat Jack down and I got started. I told him I’d seen and felt a funny bump in my breast, so I went to the doctor and he took a little piece out of it, and we found out it was cancer.  I would have surgery and then some very strong medicine that would make the cancer go away.

Jack stared into the distance and said, “Whoa.  You have cancer?  (long pause) Whoa….”

We explained the cancer I had was very different than the cancer his Grandma Bea had in her kidney.  I was lucky because I could feel the bump and get it taken out.  Grandma’s cancer wasn’t one you could see or feel, so no one knew until it was too late.

I looked into Jack’s thoughtful blue eyes, eyes far-away and churning with new information, and I asked, “how are you feeling right now?”  He stared back at me, and said, “I kind of just feel like, ‘whoa…..’”  A long, heavy pause followed, and then, “Can we go outside and play catch now?”  With a little laugh of surprise and relief, I said, “That sounds like a great idea, buddy.” I was struck by my child’s ability to know how much he could tolerate for the moment. After a week of diagnostic work-ups – a mammogram, CT scan, ultrasound, PET scan, MRI, and several grueling biopsies – I was bruised and scared, and playing catch was exactly what I needed to keep me feeling like life would go on.  Jack was approaching and retreating from the intensity in just the way he needed, and it was a revelation to me.

I’ve recently completed eight months of treatment that included a mastectomy, four months of chemotherapy, and 6 weeks of radiation.  The rigors of cancer treatment impacted my mothering, and my ability to be available to Jack in all the ways I normally am. Because he’s my only child, he has received the entirety of my maternal attention.  But during the past year, I needed to allocate significantly more time and attention to my own needs.

I could not chaperone field trips, or be room mom at school, or play catch in the backyard, or shoot hoops at the park.  We had to find new, more calm, less strenuous ways to be together.   There were incisions, drains, bone pains, steroids that kept me up all night, anti-nausea meds that made me sleep all day, and radiation burns.  There was no rough-housing, no getting scrappy.  Jack had to be careful around me.  Mama was much more delicate than usual.  Before he’d lay down next to me and rest his head against my chest, he’d ask, “Can I put my head right here?”

Having cancer made me want to hold fast to my husband and son.  Embracing my boy was even more poignant and crucial than ever.  I felt physically, emotionally, and mentally calmer when he was close, and I could hold his warm, skinny body against mine.  My husband described an emotion that often swept over him, to want to hold our son, and me, tighter than ever.  Family snuggles became a biological imperative.

An upside of my new fragility was we did a lot of quiet cuddling in bed, and on the pull-out couch, where we often set-up camp for dinner.  Cancer made me anti-processed food and anti-empty carbs, so hot dogs and mac n’ cheese were off the table.  I don’t recommend getting cancer for this, but an amazing by-product of my weakened state is that people cooked for us — often and fabulously.   We were treated to healthy, beautiful vegetarian dinners made by an incredible, far-reaching circle of friends: our village-in-the-big-city. And, we came to deeply appreciate a new facet of Jack’s adaptable personality, as he dove into plates of Chinese 5-Spice Tofu, and Mexican quinoa salad.

For the four days after each chemo treatment, I was bed-ridden with bone pain. Jeff, my husband, nicknamed me “Shuffley” for the way I would totter across the bedroom floor, to the kitchen, then back to bed.  It was very difficult to have Jack in the house during those dark days.  It felt like my bones were in labor.  I required a lot of silence, sleep, and pain medication to get through it.

We needed to ask for a lot of help with Jack.  He went for sleepovers and play dates far more often than usual, and with a wider range of friends and family than ever before.   I came to know and respect Jack’s sense of adventure in a whole new way, as I watched him pack up his little Sponge Bob wheeley bag, and head out with wide-eyes and enthusiasm to a medley of different homes.  He always came back with funny stories to tell about his friends’ little brothers and sisters and their antics, especially at the dinner table.

Letting Jack go, trusting that he could feel safe, happy, and secure with so many caring people was probably as valuable a learning experience for me as it was for him.  We had to let him go, and be ready to receive him to give him a sense of home and stability when he returned. It was good preparation for the rest of our life as parents.

Last week was the one year anniversary of my diagnosis- my Cancerversary.   I asked Jack what he thinks was different about this past year, when I was sick. He said, “You couldn’t play sports with me….but now you’re better!’  I am indeed. It feels like a miracle.

Makes me want to go outside and play catch.

Laurie Hessen Pomeranz lives in San Francisco with her husband and son.  She is a Marriage and Family Therapist, baseball enthusiast, cancer survivor, and grateful mama.

The Mother Company aims to support parents and their children, providing thought-provoking web content and products based in social and emotional learning for children ages 3-6. Check out the first episode of our DVD series, “Ruby’s Studio: The Feelings Show,” which teaches children how to express their feelings. We want to be a parenting tool for you!