How to Stop The Whining 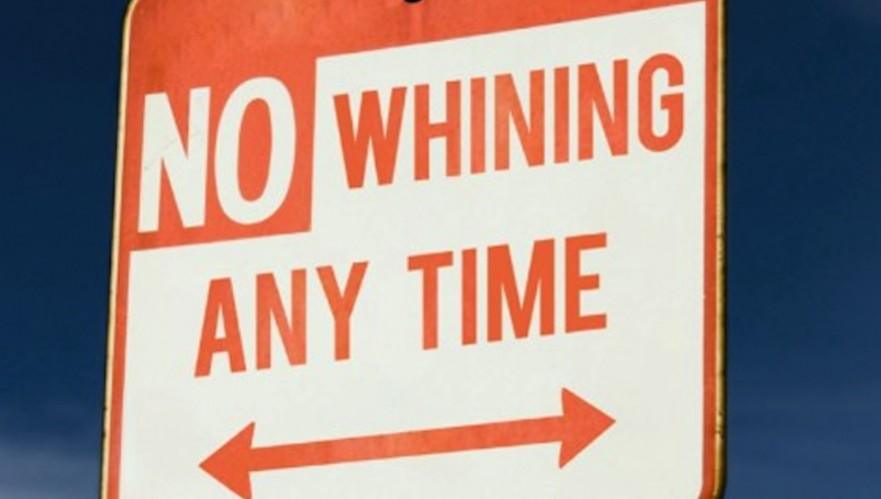 Want Some Cheese With That Whine?

How amazing is it that all kids seem to whine at some time or other? Seriously, how is it that they all use the same tone? Is that capacity just part of the factory-equipped model of child? Truth be told, it kind of is…the capacity, that is.

Children whine at different ages for different reasons. No one can say exactly when whining will start, but it can even be as young as 18 months. It is interesting that early talkers seem also to be early whiners. The toddler whiner often feels overwhelmed or out of control. He’s just not getting what he wants right at that moment. He doesn’t have the vocabulary to express his feelings, and he often lacks the ability to delay gratification and to tolerate his frustration.

The preschool whiner often suffers from lousy local conditions. The current environment is sabotaging his ability to use his “regular voice.” (He’s hungry, fatigued, had too many playdates, gone on one errand too many, Mommy’s been out of town, Daddy hasn’t been home for dinner all week, etc…) For him, whining has become a habit. He thinks that is the way to get his needs met. Children whine because it works! You hate it, you tell your child not to do it, you ignore it…and then you explode. Stop whining right now! You’re just stoking the fire.

Whining fulfills two basic emotional needs that all children have: the need for attention and the need for power. The child needs your attention, and whining usually gets it, even if it’s your exasperated, negative response. It is attention, after all. It also makes the child feel powerful because so often in the end, he actually gets what he wants, including your attention. While the capacity to whine comes with the package, the use of that behavior is learned and reinforced by you. No one can say exactly when the whining will stop, but its cessation is definitely related to your response.

A child’s whining is a clear message that he needs something. It is a cry for help. He’s frustrated, he’s impatient, he’s overwhelmed, he’s needy, he’s spent, he’s fed up, he’s done. There is always an underlying cause. It’s just that whining is the wrong way to get the help he needs.

To stop the whining, a preemptive approach is always a good idea, especially when it comes to guarding against lousy local conditions. But making sure that the child is getting the attention he needs, that the houseguests go home, for example, is not always possible. In that case, here are some suggestions for dealing with and kissing the whining goodbye.

· Tell your child the words and tone that will work. If you use your regular voice to say ‘May I please have some juice?’ then you will get it.

· Do not mimic your child. It is the height of unkindness and disrespect.

· Do let your child hear what he sounds like by setting up a video or recorder in the kitchen, unbeknownst to him. At an unloaded time, play it back, saying, I am not sureyou know what it sounds like to me when you whine. You are giving him information and teaching awareness.

· Let your child know that he will not get what he wants if he whines for it. Not ever.

· Develop a signal (a tug on the ear) that you will give to your preschool and older child so he knows to use a different voice to express his need.

· Keep in mind that your child is asking for help. Let him know that you have heard him and that you will meet that need. (I hear that you want some juice. I will get it for you in one minute if you use your regular voice to ask.) To the younger child you can ask, How can I help you? And follow it by telling him the voice and words he needs to use.

· Praise and acknowledge of his use of an acceptable voice. That is just the voice that works!

· Take a look at when the whining seems to occur. Is there a pattern? Perhaps there is something in the child’s environment that can be changed to meet the need he is expressing. This is part of being attuned to your child.

· If you have encountered a spat of whininess, give some thought to what might be causing it these days. Is your child getting enough of you? Has the baby been getting a lot of attention? Often consistent whining signals a child’s need to reconnect with you.

· If the whining is pervasive, start whispering. No kidding! In your child’s attempt to hear you, he will stop whining, and the whining pattern will be broken for the moment anyway.

If all else fails? Hang a sign that says No Whining inside a circle with a diagonal line. When the preschool and older child whines, take his hand, show him the sign, and lead him into another room, saying, Remember, this is a No Whining room. You can whine out here!

Betsy Brown Braun is the bestselling author of the just released, “You’re Not the Boss of Me: Brat-Proofing your 4 to 12 Year-Old Child” (HarperCollins, 2010) and the award winning “Just Tell Me What to Say: Sensible Tips and Scripts for Perplexed Parents” (HarperCollins, 2008 – now in it’s 4th printing).  She’s also a child development and behavior specialist, parent educator and multiple birth parenting consultant with 40 years of experience in public and private early childhood and elementary education.  You can learn more about Betsy, her books and her consulting practice at www.betsybrownbraun.com.

The Mother Company aims to support parents and their children, providing thought-provoking web content and products based in social and emotional learning for children ages 3-6. Check out the first episode of our children’s series, “Ruby’s Studio: The Feelings Show,” which helps kids identify, express, and move through their feelings. We want to be a parenting tool…  For you!