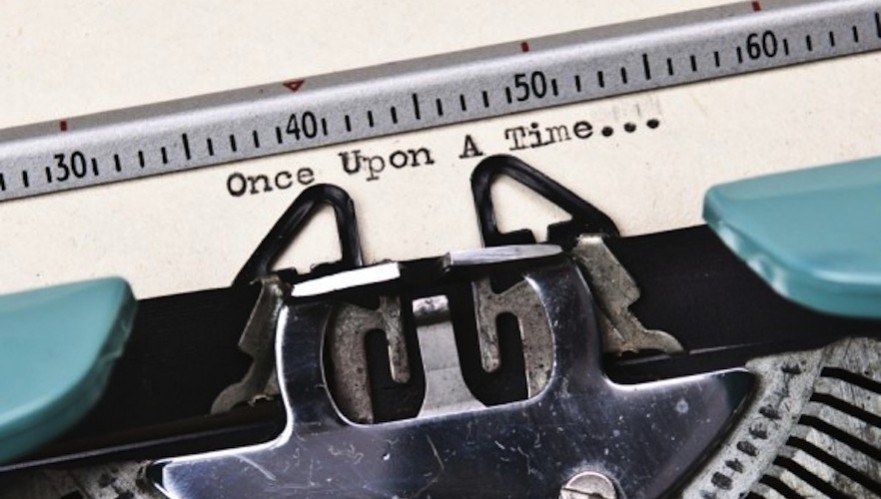 This is part 2 in a series on Talking About Adoption.

Here’s a picture book I made for our daughter during her first year of life:

Once upon a time, there was a couple named Michael and Carolyn. (picture of us on our wedding day)

They lived in a house in … (picture of our home)

Michael and Carolyn loved each other and were very happy with their dogs, Chelsea and Heidi, but they wanted to have a baby. They tried for a long time, but they could not make a baby. (picture of our 2 dogs)

Even Chelsea had babies. (picture of our dog, Chelsea, with her puppies)

But Michael and Carolyn didn’t have a baby. They were very sad. (we staged a picture of me crying for this one)

One day Michael got a telephone call. A man named Mr. Tucker told Michael that he knew about a baby who would be born soon. This baby needed a home with a mommy and daddy who would love and take care of it. (we staged a picture of my husband on the phone)

Michael told Mr. Tucker that he and Carolyn could take care of a baby. So Michael and Carolyn bought a baby crib, and Carolyn got the nursery ready, and they waited for their baby to be born. (picture of the nursery)

After many weeks went by, Mr. Tucker called again. He said, “You have a little baby girl.” (picture of me tying a balloon to the mailbox)

The story continues with a picture of the birth announcement, our daughter’s birth date and also the date of her arrival, which was the day after her birth. I ended the story with pictures of her in the nursery and pictures with us, along with personal comments.

As an adoptive mom and also as an adoption consultant for an adoption agency, I am often confronted by the question of when a parent should begin talking to an adopted child about where the child came from. It amazes me that I still hear stories of parents not telling their child they are adopted until they are 6 years old and sometimes older. Just as there is no one-time conversation regarding sex education, there should never be a one-time talk to say “you’re adopted.” I suggest to parents that even while feeding their infant they can begin to talk in soft tones to their baby and say things like “Did you know you’re adopted? We are so blessed that we have you!” Of course, your baby won’t understand you, but it will begin to give you security in talking about the subject. When you say it in a matter-of-fact way, then it becomes common place language in your home and your child will feel comfortable with the term as well.

Each baby comes with a unique story and every couple has a story to share of how they wanted a baby so much. Use that story, and write a children’s book, and use lots of pictures to make it attractive to a toddler. You’ll want your story to be very simple so a young toddler can understand it. You’re not trying to tell every detail, just enough of a story to generate some questions as he or she grows. This is your way of telling them they are adopted.

It never ceased to amaze me the questions she would come up with as she grew older. When she was about 3 years old she asked, “Was I borned or adopted?” That simple question told me I had to add a little more to the story. She was okay with asking me that question because of the openness we shared in talking about adoption.

Our first daughter’s adoption was completely closed. That means we had no picture or contact information regarding her birth mother. We only had the attorney’s name and number who had filed for our adoption. When we adopted our second daughter ten years later, it was open from the beginning. It was at this point that we made the decision to open our first daughter’s adoption and seek to find her birth mother. Having that openness helps alleviate a lot of questions and curiosity. Our daughter was about 11 years old at this point. I have to be honest with you and tell you that I was as eager to meet her birth mother as she was. I couldn’t wait to hug her neck and thank her for our precious daughter.

That said, it can be very difficult for parents when they find out their child wants to meet their birth family. They begin to feel that their child will like them better or will wish they had lived with their biological parents instead of being adopted. I think it’s normal to have those feelings. But I tell parents that if they are secure in their love for their child, then they have nothing to worry about. Embrace the possibility of finding out your child’s heritage and look at this as a time to thank the woman who made it possible for you to have a child.

When my daughter was about 5 years old she said to me, “I wish I had grown in your tummy.” I quickly replied, “I don’t wish that, because then you wouldn’t be the little girl you are, and I love you just the way you are.”

Carolyn S. Bransby is an Adoption Consultant at Embracing Life Adoption Agency, and an adoption writer. She also has two adopted daughters of her own, ages 12 and 22.