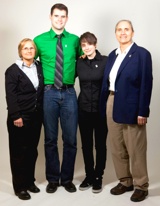 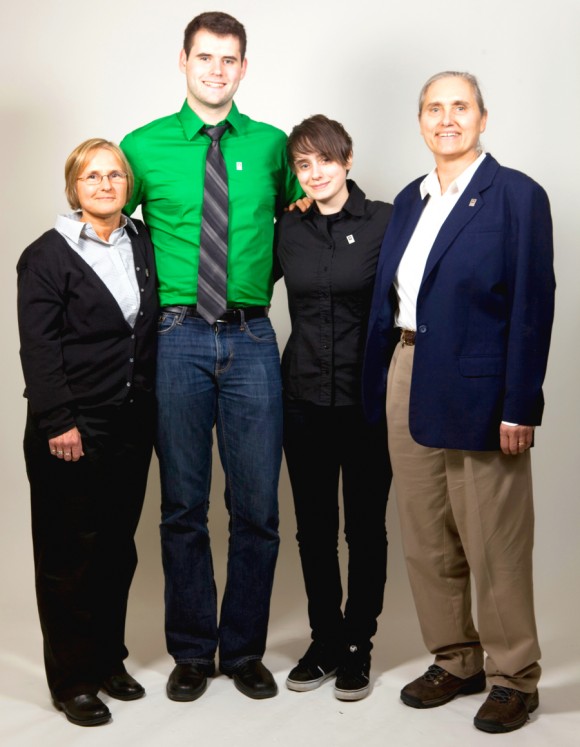 Zach Wahls, his sister, and two moms. Photo courtesy of the author

Zach is a busy guy, but between his environmental engineering studies, and his activism on behalf of full marriage equality, he spared The Mother Company some time to answer a couple of questions about what it was like, as a little guy, to be raised by two moms. Following the interview, is an excerpt from his book, My Two Moms.

When you were a little guy, how did you perceive your family in comparison to others?

Like any other kid, I was well aware of the differences that existed between my family and others. And like any other family, mine was different from every other. My mom Terry was diagnosed with progressive multiple sclerosis when I was eight. We attended a Unitarian Universalist fellowship instead of a Christian church. My moms–both medical professionals and former athletes–put a large emphasis on healthy eating and physical exercise. The fact that I had two moms and they were both gay was certainly noticeable but in no way all-defining. This was due partly to my mom Terry’s explanation of our family situation to me at a young age and due partly to the sheer normalcy–as far as I could tell–of everyday life. My moms still had to buy groceries and take me to swimming practice and balance their check books and change the oil in their cars. Life with gay parents, though certainly in some small ways different from the lives for those with straight parents, was defined not by how others viewed us but how we interacted with and valued each other. We were defined not by some external perception, but by love, strength and the commitment to work through the difficult times so we could enjoy the good ones. We were family–and that was what mattered most.

Any funny anecdote you can share about being raised by two moms?

In 1996, at my moms’ commitment ceremony, I watched them walk down the aisle…to the theme song of Star Trek: Voyager.

An excerpt from, My Two Moms: Lessons of Love, Strength and What Makes a Family, published by Gotham, April/2012

One of my recent lectures brought me back to my birthplace in central Wisconsin. I was slated to speak to students and faculty at each of Mid-State Technical College’s three campuses: Wisconsin Rapids, Stevens Point, and Marshfield, my hometown. After the talk in Marshfield, I headed up to Wisconsin Rapids for an interview with a nursing student curious about the best way to interact with same-sex couples and their families when providing medical care in a hospital.

The young woman and I talked for a while. She explained that her brother was gay, and she cared deeply about the comfort and well-being of her patients, but I slowly started to get the sense that she was considerably more religious than she was letting on. About forty-five minutes into the conversation, she disclosed that she was, in her words, a “Jesus freak.” However, she went on to explain that she is among a small minority of biblically convicted Christians that believes homosexuality to be a sin, but also recognizes the right of homosexuals to marry a person of the same sex.

I explained my story, how I was conceived, how my moms met, the challenges we faced as a family when my mom Terry was diagnosed with multiple sclerosis—a devastating auto-immune disease that put her in a wheelchair—and the legal obstacles we had to overcome. I talked about their 2009 wedding and how I got to be the best man and give the toast at the reception. She asked questions about how to make families like mine feel comfortable, how to refer to significant others, and slowly she began to share more of her own story.

Amanda had been married two years earlier in a small religious ceremony attended only by herself, her husband, and her pastor. Their union had taken place at the Great Recession’s onset, and they could not afford a public ceremony with friends and family. They therefore decided not to file for a marriage license until they could forge their commitment in a public setting. I listened as she explained that in the interim period between their religious ceremony and their public and civic one, she had to check the “single” box on her 1040 form when filing her taxes. “It felt like I was lying,” she told me, and then paused. “It hurt.”

“Yeah,” I said. I understood. “That’s what my moms had to do for fifteen years. It’s what gay couples all across this country deal with every day.”

She looked up at me with clarity in her eyes. “That’s wrong,” she said softly. Despite being a straight, conservative Christian woman from central Wisconsin, she understood the pain my moms felt.

I nodded, and in that moment I realized that people don’t need to be gay or lesbian or bisexual or transgender or have an LGBT parent or parents to know and understand the challenges families like mine are forced to endure.

We just need to listen.

Zach Wahls is a student, small business owner, author, activist, and most importantly, brother and son.