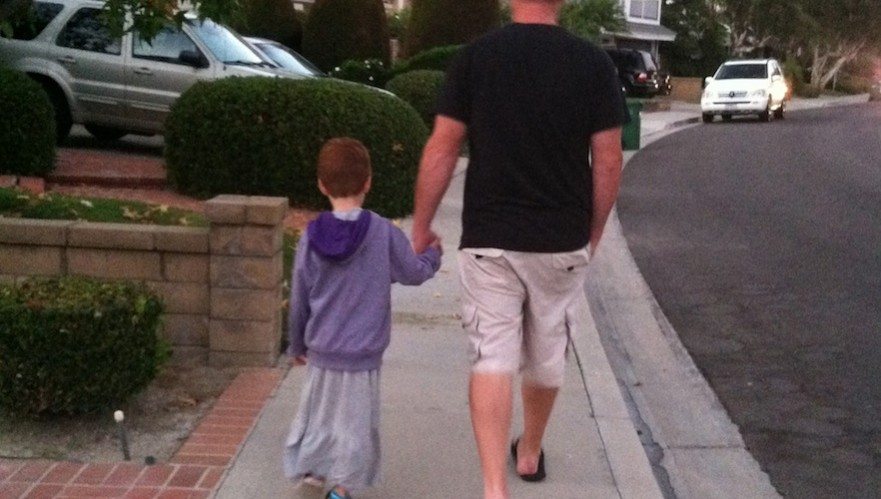 My 3 year old is learning about gender.  Every day from school he recites the latest he’s heard on the yard.  “Boys have short hair” or “boys like trucks” and I try to steer him back.  “Girls love trucks too!  Your nana drives a truck!” But gender stereotyping is out there and it’s hard.  On the other end of the spectrum, are the children of parents who identify more strongly with the “other” gender than their given one. Matt Duron, father, shares his experience of raising a gender nonconforming child.  — Abbie Schiller, CEO and Founder, TMC

How is your son’s school handling his gender nonconforming choices?

To be honest, they haven’t been great.  We hope that changes in the near future; we’re always hoping things get better. My wife and I are always willing to roll up our sleeves to help the school reset its campus culture.  We’re willing to educate the school and district on Title IX and our state’s safe school laws – which they are legally supposed to be in compliance with.  But, often, we are seen as a liability and high maintenance, which is disappointing and frustrating.  We want our school to be safer and more inclusive and more welcoming for all students, not just our son.

How do you guide your son to react to teasing from kids?

Above all else, my wife and I try to raise confident kids.  We want C.J. to be secure in who he his and not care what other people think about him.  But, that’s easier said than done.  We role-play with him so that he has responses and reactions ready to go when someone says something to him.  A lot of times, when another kid asks rudely why he’s wearing girl clothes, C.J. will say “cause that’s my style.”  I think that’s perfect.  And, of course, he knows that he can always go to an adult if he feels unsafe or his feelings or body have been hurt.  What sucks is that some adults aren’t protective of kids like my son.  Adults are often worse to my son than other kids are.

How do you guide your son to react to adults who tell him to “man up”?

He thinks it’s weird when adults are uncomfortable with gender nonconforming kids.  It’s like he thinks they are a little less intelligent, less worldly.  We let him think that.  He has the choice to educate them, have us educate them or ignore them.  We follow his lead.

Do you accept all his choices of what he wants to wear to school, and out in the world? Do you ever intervene?

My wife and I have been on this parenting journey for almost five years and we are both at a place of total acceptance now.  Just as our older son gets to pick his own clothes, toys, friends and passions, so does C.J.  We wouldn’t be parenting fairly if we did it any other way.

C.J. just turned seven, so he’s old enough now to weigh his options; options like, wear the shirt that he loves from the girls’ section and possibly get made fun of, or wear something a little less effeminate and possibly not get made fun of.  He makes the decision and he knows that I always have his back.  He’s definitely learned to conform more in certain situations and in certain places.  He protects himself.  That’s a relief, but also it’s sad – because he can’t totally be himself all of the time.

I’m a protector, I want to walk around protecting him all of the time.  But, I can’t, and that’s hard for me to deal with sometimes.

You say you’ve “evolved” in terms of his ability to handle your boy’s inclination? How?

It’s not uncomfortable at all anymore to see my son wearing “girl clothes” or playing with “girl toys.”  I got to the place where I realized that clothes are just fabric and toys are just plastic, who cares what fabric a kid wears or plastic they play with?

I mean, I could care.  I could be a jerk to my kid and tell him that he can’t like the kind of stuff that he likes, but what kind of man and father would that make me?  I’m supposed to teach my kids right from wrong, self-confidence, decency, respect, how to treat others, how to treat themselves, how to be good people and be leaders.  Teaching my boys those qualities are what’s important to my wife and me. Their gender expression has nothing to do with any of that.  I’m not going to kill his spirit by telling him that the way he was born is wrong or bad.

If you read the statistics for kids like my son they are pretty scary. They have the highest rate of suicide attempts, drug abuse, unsafe sex and depression.  Am I going to drive him to those things or try to save him from those things by loving him no matter what?  You better believe it’s the latter of those two. I will do everything I can possibly do to ensure my son doesn’t become a statistic and help as many other kids as I can.

How does your first-born deal with his brother’s gender-nonconformity?

For a while, our older son didn’t realize that his younger brother was different, or not that different at least.  He picked up on it when he was about eight and his friends and their parents started making comments and there were a few months when he would say things like “when is my brother going to be more like a brother?”  But, once we explained to him that C.J. is gender nonconforming and there are other kids like him out there, things got better.  Our older son, like us, just needed to know what he was dealing with and that, yeah, it’s different, but it’s not weird.  Lots of people are gender nonconforming.

Then, when he was in third grade, our older son was being bullied because of C.J.’s gender nonconformity.  That was so hard to watch and deal with, to see one of your kids getting innocently bullied solely because of the actions of your other kid.  We eventually had to move them to different schools, which has worked out so much better.  It’s a pain for my wife, who has to spend an hour in the morning and an hour in the afternoon getting them both to and from school, but it gives them the independence that they needed.

Matt Duron is a father, husband and police officer in Orange County, California. His wife, Lori Duron, is the author of the book and blog, Raising My Rainbow.

The Mother Company aims to support parents and their children, providing thought-provoking web content and products based in social and emotional learning for children ages 3-6. Check out episodes of our Emmy winning series “Ruby’s Studio” children’s video series,  along with our beautiful children’s books, apps, music, and more.