A Father’s Day to Celebrate 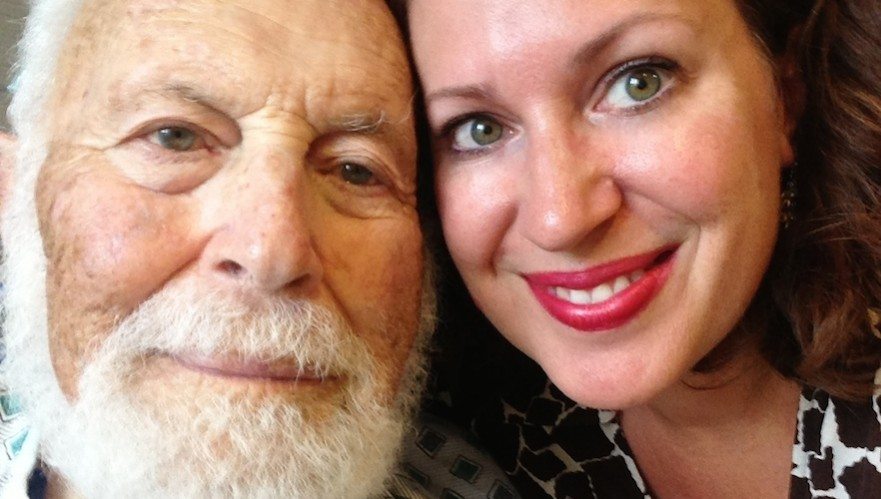 Hey – Just a heads up that dad is going to the hospital right now.  He has a hernia and is in pain and needs surgery soon – but additionally (or maybe as a side effect) is lethargic and not eating or drinking.  Marva is taking him there now (not sure which one).  I’m on my way there and I’ll keep you posted.

That was the email I sent to my two brothers and sister as I drove to the hospital wondering if dad was in serious condition or just dehydrated (with a few complications) – as he often is when we take him to the hospital.  When you have a father that is 95 years old, this is kind of normal.  There are many doctor visits.  So many, that we had to hire a caregiver, a wonderful tough-as-nails warm hearted Belizean woman Marva, to help care for him.  When I got there – the same hospital where I gave birth to my son – he seemed fine.  Waiting in the ER for 3 hours wasn’t easy though.  He kept asking why he was there.  We kept explaining.  And then he coughed.  And I knew.  Pneumonia.  The kiss of death.

Seeing a parent in the hospital is nothing less than terrible. A million thoughts go through your mind from “is this it?” to “how much longer do we have to wait for those test results?” and occasionally, “I wonder if Starbucks delivers.”

He saw the doctors and once my mom arrived, I had to return home and explain the situation to my two children, properly preparing them for the worst.

Last night they were able to deal with the hernia and were going to send him home with the idea of having the surgery next week.  It became less urgent. Then this morning it seems they changed their minds – and wanted to operate sooner.  But it turns out that he also has pneumonia which may make it more complicated to operate so they’re not sure what to do.  He still hasn’t eaten (day 2).

I’m going there and will update from the hospital.

At the hospital, the doctors explained the urgency of the surgery: his colon was torn and leaking into his body which was “toxic and lethal.”  They carefully explained that the likelihood of him returning to a “normal” quality of life was extremely low – and that it was “extremely likely he might pass during the surgery.”  My stomach dropped.  There was absolute silence. At best, they estimated he would be in ICU for several days, possibly requiring respirator, maybe dialysis, and some other devices.

The doctor just came in – the situation has become more serious.

Poor daddy has pneumonia on his left lung – his breathing has gotten much worse (it sounds like sipping through a straw in an empty drink)- and at the same time, he has a tear in his colon and there is sepsis.  They have to operate in the next hour.  It is a “high risk” surgery because of his age, infection, and trouble breathing.  They mentioned everything from kidney failure, to death as a possibility.  They said there was a 20% chance he would pass during the surgery and then said that recovery will make him more sick.  They were very clear to prepare us for the worst.

I wondered how my two brothers and sister were reading these emails.  This wasn’t easy news to deliver.  Or hear.  These are the moments that crawl by in a surreal way.  You can hear echoes and heartbeats.  Little gasps.  Palpable fear.  When you are that close to a death – or a birth – time becomes altered.  My mother remained strong.  “Listen to me,” she told the doctor, “this man has a strong will to live so you just know that.  He wants to live and we want him to live.”  At that point the doctor realized my mother doesn’t take “no” for an answer.  I was reminded what it means to fight for what you want instead of just accept the words from experts.  Normal people accept.  Champions challenge. But I also wondered when do you ever get to just be scared and vulnerable.  And if I am, will my dad die?

The updates were coming more frequently:

Looks like dad’s surgery will start in about 30 minutes – he has been given 1 bag of plasma to thicken his blood (since he has been on thinners and they can’t do surgery with such thin blood).  They have to give him another bag of plasma and then surgery.

Mom is trying to stay strong.  I truly admire her strength and know this is the hardest thing she has ever been through.

Then it was time to take him to the operating room.  I asked the nurse, “do we take his things with us or are we coming back?”  And the gravity of the situation once again became real.  He might not come back.  Quietly, we each picked something up.  His shoes, clothes, reading glasses and rode the elevator together.  Only two people could go into the pre-op room with him.  This would be my goodbye: “Daddy, they’re going to operate on you to make you better and I’ll see you in a little bit,” I said “I love you” and added, “see you soon” desperately.  The surgery was scheduled to take two and a half hours.  I said a little prayer hoping that the doctors wouldn’t emerge before that time with the dreaded news.

Two and a half hours crept by.  No word from the doctor – and then I got worried that overtime was happening.  But shortly thereafter, the team of surgeons emerged.  Cautiously smiling.

“The surgery was successful.  He’s not going to the ICU, no respirator is needed.  He’s as good as he can be.”  We won the lottery.  For now.  Mom gave a knowing smile before leaping to hug all four doctors.  Her love for my dad is truly inspiring and irrepressible.

Now started the long road to recovery. A week in the hospital and three weeks in a rehab facility.  His first meal (matzo ball soup), his first post-op scrabble game (he won).  My mom slept in a chair by his bed at night until we insisted getting her a bed.  The stress of the situation was enormous.  And yet, there were beautiful little moments that I wanted to hang onto.  Moments that I feared might be our last together.  Feeding him dinner.  Trimming his beard.  Singing the songs he had sung to me as a preschooler.  Beautiful little moments that made me cry in their profoundly humbling, simple, human connection.  He was my daddy.  And I wanted him better.

“What am I doing here?” he would ask over and over.

“We’re getting you better so you can come home,” I would answer.

Every goodbye, I feared would be our last. He got worse, and then better.  Worse again, and better.  And by some miracle, last week, we took the kids’ drawings down that decorated his room, and we brought him home.

Well, DAD CAME HOME YESTERDAY! An ambulance brought him home and he was carried up in his wheelchair. He was definitely tired but so happy to be home.  Charlie and dad were watching TV when I called  – something that hadn’t happened in a month – and, well, he’s home.

This morning, I was sent a picture of Charlie sitting on mom’s lap sharing an English Muffin for breakfast.  This used to be a daily ritual for those two but I hadn’t realized because mom has been with dad this whole time, Charlie was fully separated from both grandparents and his routine with them both.  The caption on the photo was “life as usual” and I’m just so happy that this is the next chapter in this evolving story.

While we know he won’t live forever, I think we should all collectively be so grateful to have him home.  Grateful to Marva for her tireless efforts and determination.  And grateful for mom for calling the shots and steering this ship straight.  It wasn’t easy for either of them.  But boy is dad lucky to have such strong women fighting for his life.

I hope to see you both at the house when you can come.  It will be lovely to sit in the garden and feel pure gratitude. 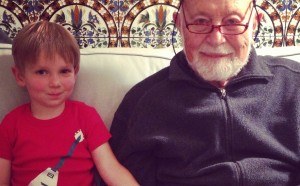 The Mother Company aims to Help Parents Raise Good People, providing thought-provoking web content for parents and products based in social and emotional learning for young kids. Check out our “Ruby’s Studio” children’s video series, along with our books, apps, music, and more.