Why We Created “The Safety Show” 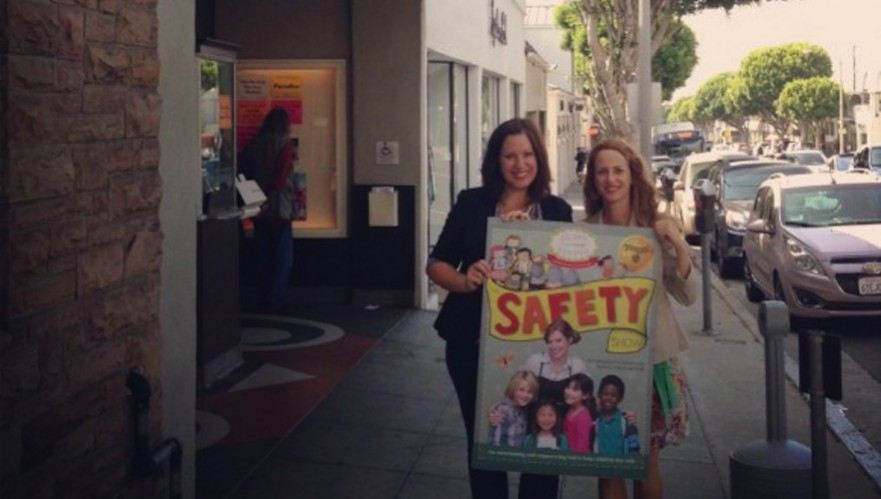 Above: Abbie and Sam at the LA premiere of Ruby’s Studio: The Safety Show.

My wonderful mother, who had the best of intentions, scared the bejezus out of me regularly in her effort to keep me safe.  Growing up I was told stories of kidnappers, terrorists, strong undercurrents, coyotes who would eat small children, kids who drowned in pools, bathtubs, sharks, barracudas, snakes, bears, lions, hijackers, hitch hikers, fires, earthquakes, nuclear war possibilities, you name it.  Before I had reached kindergarten, I was a pro at the “what if” and, my mother argued, I was better off for it. “What if a fire started in this theater?” she would quiz me.  “I would run towards the stage exit,” I answered automatically.  Right.  “What if a person pulled their car up and tried to take you?” “I would drop my weight and scream and try to get away.”  Truth is, I was haunted by the scenarios she “prepared” me for. And frankly, few of them were even likely.

As a mother, I sought a better way to prepare my children for potential harm.  But I didn’t know how.  How can we teach kids about the dangers in the world without scaring them?  How can we help them remember how to keep themselves safe when we aren’t around?  I wanted my daughter to both trust her fear and weigh the danger of any situation.

Six years ago, when my daughter was three, I attended a neighborhood talk lead by Safety Expert, Pattie Fitzgerald.  Sitting in a friend’s living room, 15 parents of young children listened as Pattie started rattling off statistics.

Pattie’s approach was eye opening and smart. Her language was wonderfully child-friendly and un-icky.  She empowered us with concepts like “children need to know they’re the boss of their bodies” and “they should trust their fear – which to them is an ‘uh-oh’ feeling.”  I was eager to pass down Pattie’s teaching to my child.  But there was no book.  And since my daughter learned quickly from media, a video would have really helped.  (The one show that was available didn’t mesh with the smart teachings from Pattie – and it actually really scared my kid with a crazy, over-the-top gorilla character.) So, right there and then, I vowed to one day make a show to help a generation of children – and their parents – keep themselves educated about safety.  That was six years ago. 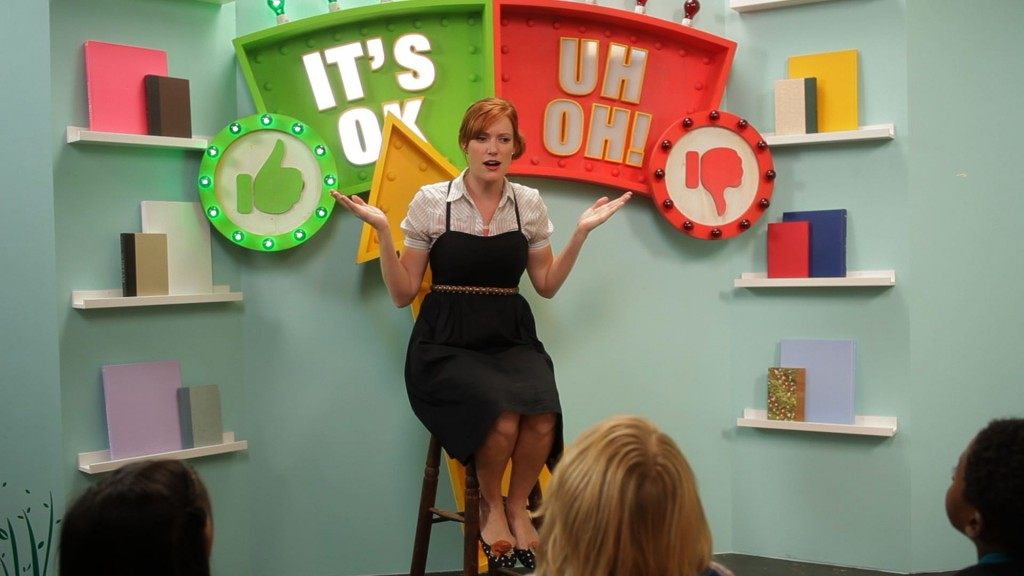 Last year, funded by parents who also shared the need for this show and the others we’ve produced at The Mother Company, Sam and I sat down to figure it out– with Pattie on board as our expert.  Pattie gets a lot of requests and we were honored she chose to work with us.

We talked about the 4 main things we wanted children to take away from it:

We felt those four things were the basis of Pattie’s teachings and the most important information to get across.  If our mission was to truly save lives with a children’s show, these messages were the most vital.

We wrote and re-wrote, added, and edited.  We tested for “ick-factor” – we wanted this show to cause no squirming.  Zero ick.  And when we thought our little script was Emmy worthy, we raised more money to make it.  Under Sam’s wing as the show’s director, we started putting it all together.

We began by matching animation styles to the segments we’d written.  We found a wonderful animator in France who we trusted to tell the “little story about safety” depicting an adorable hippo family having a day at the community pool.  We wanted this story to encase all the messages of the show as a stand-alone segment on safety for schools to use in their education.

We knew we needed to address some form of stranger-danger but didn’t want to scare kids  (or parents!) since this whole show is about empowering them.  Our Garden Theater friends did the job by having a run-in with a spider who works at the corner “bugstore” and offers them candy.  The fact of the matter is that 90% of the time, it isn’t the “strangers” that harm our children – it is someone they know.  This segment reaffirms how crucial it is for kids to listen to their fear (their uh-oh Feeling) and check first with a safe adult before doing anything unexpected.

For the segment about getting lost, we wanted a swirly watercolor animation with a retro cool kind of feeling.  Among my many favorite parts in this segment, I exhale a little when the mother empathizes after finding her daughter “that must have been so scary!” I hope other parents adopt that approach. So many parents get mad at their kids when they get lost.  It’s a natural reaction from a parent since we’re upset – and often feel it is our fault but want to blame the child for wandering. Getting lost is scary!  In this segment we tackled the topic from a kids’ perspective and gave kids a plan in case it happens to them. (And check out the rockin’ music in this scene.)

(We had three choices for animal hats we wanted the lost girl to wear. We figured a cute hat would lighten up a situation that can be scary.)

Speaking of music…our music video is an anthem to being the “boss of your body.”  It has been our most ambitious music video to date with a two day shoot, over 75 dancers and drummers, and kids from all over, including a few who drove in from Vegas.  It was a fun, empowering, amazing weekend.  I co-wrote the song with our composer Christian Moder and my heart exploded a little hearing everyone sing and dance to a chorus I created! It was a life-changing event for me. 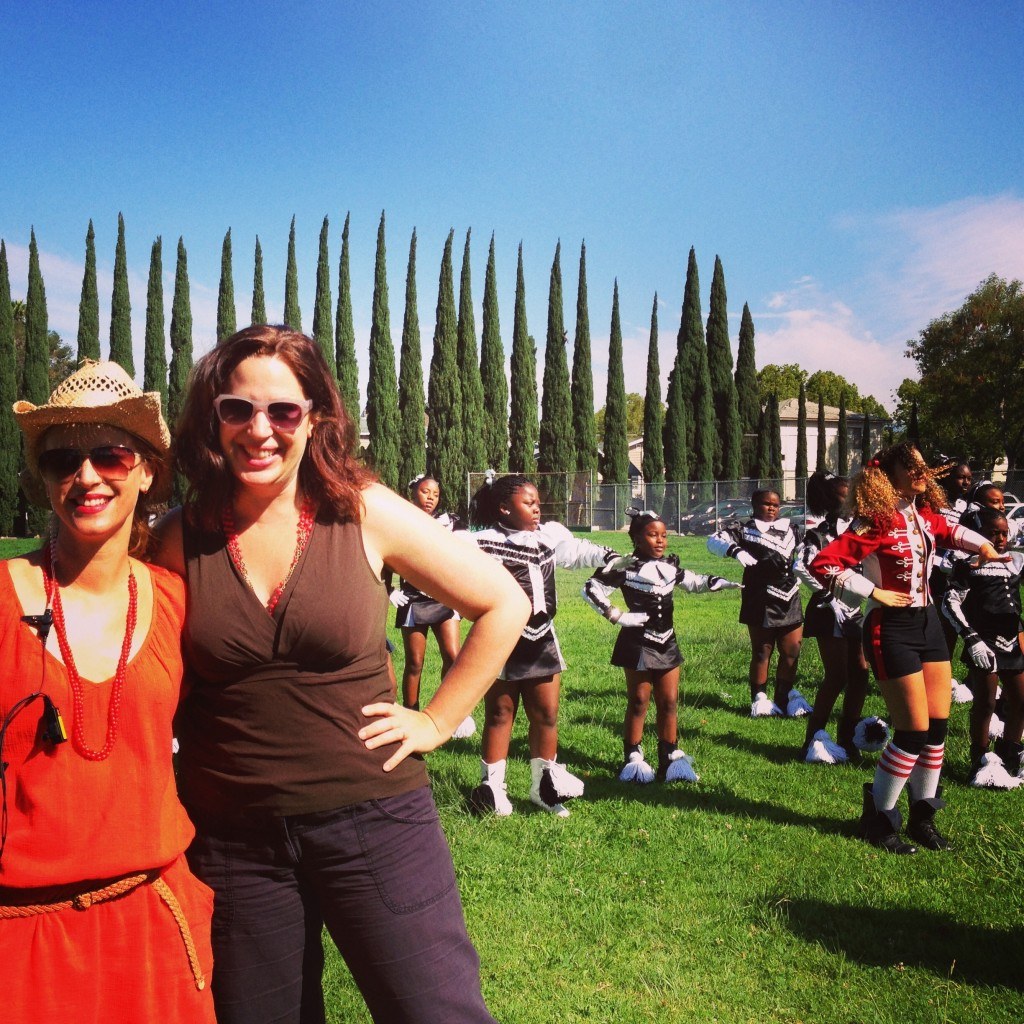 (Sam and Abbie enjoying the shoot of the “Boss of My Body” video.)

(Boss of My Body video.)

One challenge we had in writing this show was to get the right messaging around a kid who was being touched in ways he didn’t like – without it being creepy.  So we brought back our favorite character from “The Feelings Show” (and from our best-selling book “When Miles Got Mad”) and made it his birthday with an overly excited family who pinched, tickled, and noogied him.  It’s a delicate segment because we didn’t want to say that all affection is bad – only the kind that doesn’t feel right.  This segment accomplished our goal with humor and understanding.  Hopefully it will reaffirm for kids that their siblings aren’t allowed to hurt them in any way either.

For extra fun, we added in segments with kids talking – totally unscripted – about getting lost, and safety, and being the boss of their bodies.  Kids are so wise and funny naturally.  These kids are also exceptionally adorable…and for other kids viewing the show, relatable.

One of my favorite parts of the show is actually meant for parents.  It’s Ruby’s special good-bye where she asks the kids in the studio “How would you like to say good-bye?  With a hug or a handshake?”  As a child, I was strongly encouraged to “say goodnight” to everyone around my parents’ social dinner table before I marched upstairs to bed.  I can’t tell you how many strangers I had to kiss and hug and how that sends the totally wrong message to children about trusting their instincts and respecting themselves when they don’t want to kiss or hug someone else.  When Ruby asks the kids in the studio – she is giving them the choice of how to say good-bye – which as parents, we should offer to our kids too.  It’s respectful and will help keep them safe. (I learned this from my daughter’s wonderful kindergarten teacher, Mrs. Hamilburg.) 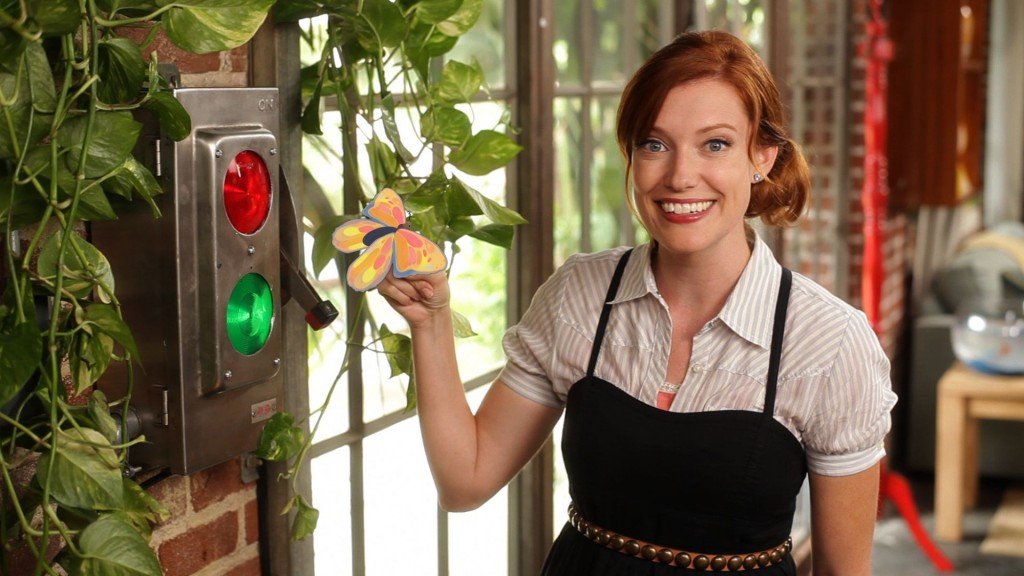 In all, as the show came together, Sam and I realized it was as beautiful and fresh and empowering as we had dreamed.  It was the show I needed six years ago to help educate my daughter about her safety without scaring her.  It is the show my three year old son now chooses to watch and sing along to.

It is our hope this show lives for generations and becomes a childhood staple.  And it is our hope that the messages in it carry beyond childhood.  In talking about this show to a friend, she said “Gosh, if I had known I was the ‘boss of my body’ when I was in college, I would have been so much better off.”

“Ruby’s Studio: The Safety Show” – Trailer from The Mother Company on Vimeo.