Tweens and Tech: Why my 10 year old won’t get a phone 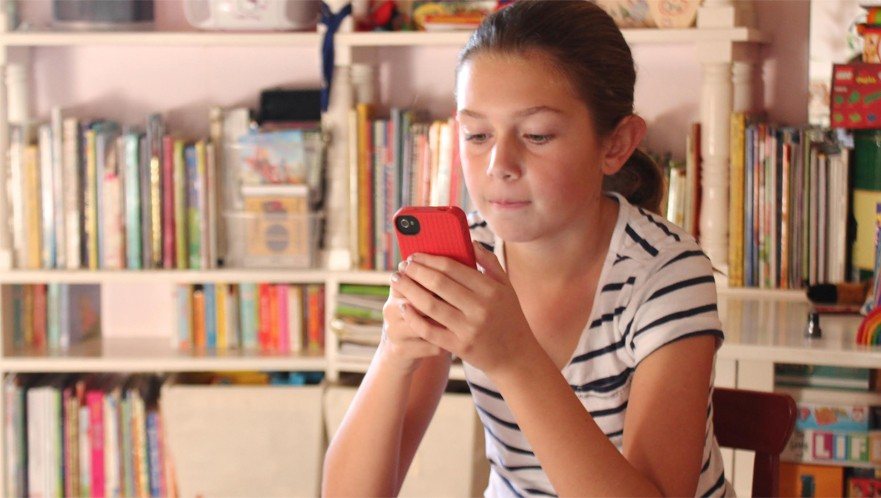 One of the worst parenting mistakes I ever made was to give my 8-year-old daughter my old iPhone “just because.” She had been asking – begging – for months.  “EVERY other kid has one/I need to be able to contact you in case of emergency/I’ll only use it for travel,” she pleaded. I caved because, really, I was curious to see what would happen (and what do you do with old iPhones anyway?).  We cut off phone service so she could only text and I gave her a set of very reasonable rules. She was sincere in her promise to adhere. But my rules turned out to be too thin and things spun out of control.

Everything started out fine. It usually does. Within a month, she was texting friends (and possibly friends of friends) around the world at all hours.  She was playing video games like a full-blown tech addict, rarely looking up to answer a question – if she answered at all. Other moms complained to me, “my kid now is bugging me for a phone because your kid has one.” AND…she secretly set up an Instagram account and was posting pictures of her little brother and of herself. Not inappropriate pictures, but still! I was overwhelmed – the pace of social decline was rapid. Where was the girl I knew? I had to shut it all down immediately. The accounts were closed.  The phone was tucked away somewhere we all forgot about.  Sanity was restored to this child who was now free to play soccer and dance and hang out screen free.  Phew!

“When will I get it back,” she would ask regularly. It was the monster we all wished we could ignore.  I would answer honestly, “When I am ready.”  She’s now ten, and will soon start middle school.  Every kid will surely have a phone (for real this time). She’s ready for the phone.  I’m still not.

It took a while for me to realize why. This isn’t just about her having a phone.  It is about something else. Giving my daughter a phone is about me losing the parental control that I am so used to and fond of.  It is about letting her go untethered.  She’s growing up and I have to trust her to make the right choices.  A phone connects her to people I don’t know, possibly creepy and dangerous. It creates addicting distractions, becomes an incessant time suck, and it connects her to access I can’t control (yes, I realize I used the word “control” twice). Can’t I keep her young a little longer?

As the parent of a girl, phones – for all the selfie, self-centered, superficial, fake, competitive, fast paced world they introduce – are especially concerning. Post a pic and hope your friends respond about your looks! Draw confidence from that feeling of being digitally liked!  Get a negative comment and let it stew in your brain, clouding your thoughts, your studies, your social world. The fake status and altered self-esteem phones grant you troubles me. How many followers you have. How many texts you get (especially during a conversation with someone else). Digital drama of a tween can be intense!  Gossip is so public.  Shaming is so normalized. She’s been so sheltered from that, I really loathe to open those gates.

A phone also separates her from me. This is the beginning of when friends become more important than parents and I just hate that.  It also starts a downward spiral on how she authentically connects to others. Not to mention all those potentially dangerous cancer-causing, sleep-disrupting EMTs…

At her soccer tournaments, between games, girls sit in two groups: girls with phones and girls without.  The girls without chat to each other.  They kick the ball around.  They walk around together.  The girls with phones stare down silently or they blast music they think others want to hear. What are the implications on how kids learn to connect and socialize?  How can this all be handled at such a young age?  Won’t this just become a constant headache to manage?

I asked one of the phone-addicted girls on the soccer team how long she has ever gone without her phone. She asked if sleeping counts.  Think about that.

So here is where I’ve landed: I realize that as much as I’d like to, I can’t avoid this modern day reality forever.  The future is here, but I can stall her from it a little longer… “You know how all your friends are getting phones for their 5th grade graduation?” I asked my kid one day.  “Well you won’t be one of them. I want you to buy your own phone.  You have to pay for half the phone and the monthly fees. Then you will truly appreciate it. A phone is not a gift, it is an earned privilege.” She was pissed but immediately started figuring out how to earn $300 by this summer.

I realize that I can’t stop this technology train.  It’s coming for her. I will have to learn how best to manage it. A phone won’t be a gift – that just sends the wrong message.  It will be a carefully earned privilege that will come with plenty of rules.  One of those rules will be that family time is tech-free time.

As for me, I suppose I’ll need to come to terms with the connected world my daughter is growing up in.  I’ll have to trust and untether and hope that all the things she has learned about kindness and fairness (and time management and study habits) she holds on to. And I’ll have to remember that she’s a good kid and can use her tech to do good things as well.  One of which could be keeping in touch with me.

The Mother Company aims to support parents and their children, providing thought-provoking web content and products based in social and emotional learning for children. Check out episodes of our “Ruby’s Studio” children’s video series,  along with our beautiful children’s books, apps, music, handmade dolls, and more.