Being a Dad: A Q & A with humorist Joel Stein 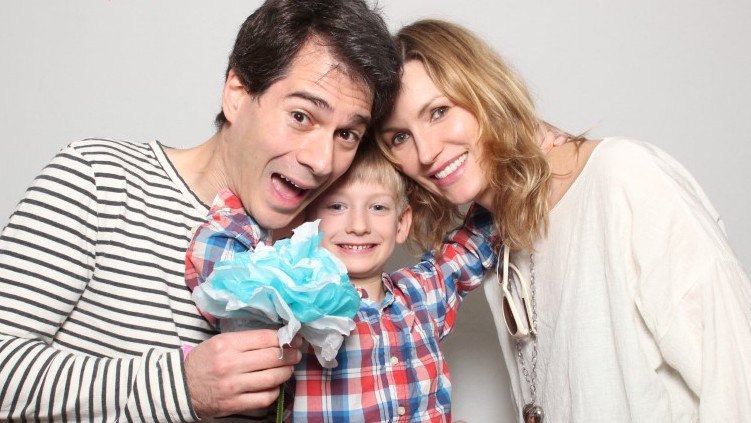 The first few years of parenthood throw most of us for a loop – the lack of sleep, the tantrums, the overwhelming love, the existential fears that keep you up at night! My husband and I have found that the best coping strategies for this roller coaster ride are laughter and commiseration. So when Joel Stein’s book Man Made: A Stupid Quest for Masculinity was released 3 years ago, I knew it would be the perfect gift for Father’s Day.  My husband and I had both been fans of Stein’s column in Time magazine and this book (in which he tries his hand at various “manly” activities in order to prepare for the birth of his son) did not disappoint. It was hilarious, poignant and relatable. Reading it made both my husband and I feel less alone in our feelings of inadequacy. Five years later I still recommend this book to everyone I meet who is about to embark on the crazy journey of parenthood. So, for this Father’s Day, I decided to check back in with Joel Stein to see how the reality of fatherhood has matched up to what he had anticipated.

Before your son was born did you have a vision of what fatherhood would be like?

It’s so hard to remember the past…I think everyone scared me that fatherhood was going to completely end my life, change my life – it was going to be the all-consuming thing that prevented you from pursuing any of your goals and that scared me. Not that I saw that in my dad, it’s just that those are the warnings. Also, I had a kid late. I was 37 so if I had a kid when I was 27 or 23, I think those warnings would have rung more true.  But I had already done plenty of all-nighters for college and then work, I had already stopped going to concerts – the shift wasn’t that dramatic for me.

Has anything about parenting really surprised you so far?

I thought it would be more proactive and I didn’t expect how reactive it actually is.

What is your biggest challenge as a father?

My biggest challenge is to remember that my son is a different person than I am. Knowing that my son is actually hearing noise differently than me, that he’s seeing things differently than me, has different desires, feels accomplishment differently. The most basic “computer brain” stuff. I still make the mistake of assuming that he’s wired like me – not just because he’s my son, but just because I was walking around the world a lot before my son was born, assuming everyone was wired like me. Now that I’ve seen him and other kids in a raw younger state I kind of realize how different we all are and it really makes me see the world a little better. It’s amazing that we’re all able to socialize and act the same, when we’re all processing things so differently.

Sometimes our kids have character traits that we can’t relate to, how do you reconcile the differences between you and your son?

The other day, my son and I were talking about working hard in school and I said to him, “If you do well you will be happier because you’ll have more choices and be able to do more things.” And he told me something that my sister said when she was 15 so it really struck me. He said, “I want to be happy, but I don’t want to do a lot of things.” And I don’t know how to fight that. He might have a different or better view of happiness than I have and I feel in my bones that he’s wrong – but you know, that could be a lifelong issue that I have to work out.

So do you ever want to nudge your son towards behavior that doesn’t seem innate?

Yeah, I was just with a bunch of dads and we were talking about this very thing. We started talking about what they referred to as “grit.” How do you instill grit in your kid? I spent a lot of time teaching my son to read and it was a slog – he was very resistant. And I did it hoping that he’d feel this great sense of accomplishment for getting through it and I don’t think he did. My dad warned me the other day, “Remember,” he said, “your son is different than you. He’s not going to necessarily be as intellectually bent or as ambitious as you are.”

Now that you’re a parent has your perspective on Nature vs. Nurture changed?

I’m so thoroughly done with the nature vs. nurture debate. I feel like we can teach behavior, but most of it is just they come out who they are. There’s just not much you can do. Like Chris Rock said, “You can keep them off the pole and out of jail,” but not much more. I have a lot more forgiveness for parents of difficult kids.

What’s your favorite thing to do with your son?

My son’s idea of a fun game is really repetitive and miserable for me. I kind of hate playing – which by the way, I do all day. It’s all he wants to do and I’m his favorite play person – but, the thing is that in that boring hour that I’m playing with him he will say 2 things that are amazing. So even though I will have a much more interesting hour on my computer, it comes with fewer highlights.

How do you feel about the world that your son will be inheriting when he grows up?

I think the world has gotten worse and worse for boys. Before there were schools – when the main job of a boy was to rape and pillage – it was a lot easier to be a boy than a girl. It’s still easier to be a man than a woman, but I think it’s gotten a little harder for boys that are wired to build and destroy and not sit at a desk like me. It is obviously more difficult for them, you see them all drugged up with ADD meds. I mean most boys just can’t sit still – it’s primal.

That said, I think in broad terms the future is much better than the past. People are undoubtedly softer and nicer and more accepting than they used to be. So in general I’m very optimistic.

The Mother Company aims to support parents and their children, providing thought-provoking web content and products based in social and emotional learning for children ages 3-6. Check out episodes of our “Ruby’s Studio” children’s video series,  along with our beautiful children’s books, apps, music, and more.