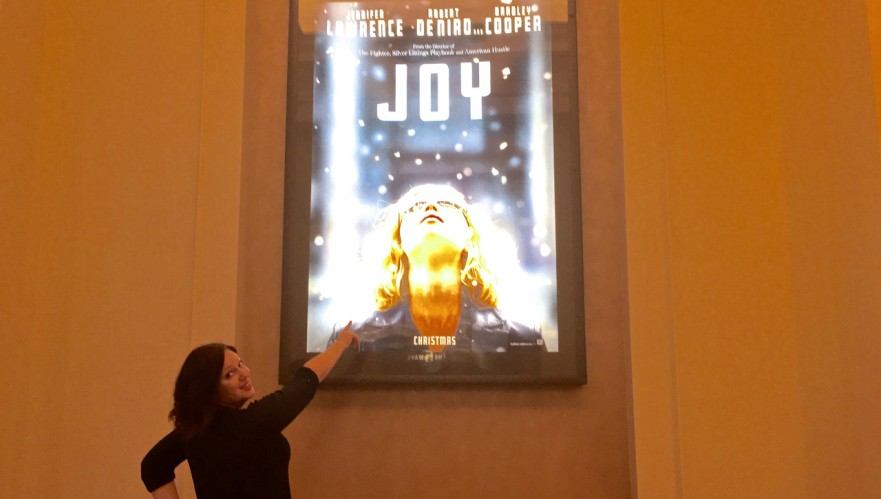 Two weeks ago, I attended a preview screening of the new David O Russell film, JOY, and watched the movie in awe. What an inspiring story.

Joy follows the life journey of entrepreneur Joy Mangano which is filled with adversity, humor, pain and inspiration. Watching Joy’s unrelenting struggle as she tries to launch her product was as painful as it was comforting.  It spoke so realistically to me (as an entrepreneur and mother…and daughter).  At one point during the film, my husband leaned over and whispered, “Are you OK to watch this?” And I was.  Because we are all put through challenges and either come out of them still standing or have to get back on our feet. It is encouraging to watch Joy get back on her feet.  Again and again.

After the film, I was so moved that I wrote the director a thank you note. It said this:

This movie spoke to me on so many levels.  I too am a mother (of a daughter and son) who living in a kooky house with my parents, and fighting tooth-and-nail to make my company a success.   I too have risked everything, fought adversaries, and faced setbacks.  Entrepreneurs are a segmented group and seeing Joy’s journey makes my challenges seem less unique – in a wonderfully comforting and inspirational way.  Her struggle is so human. Thank you for telling this story with such vision.

The note came from the heart.  David O Russell is a great director but he’s also a person who created something and put it out there – and I wanted him to know that it inspired me, gave me hope, and generally rocked my world.  And then, like instant karma, the universe responded …

David evidently forwarded that note to the powers that be at Fox and asked to get me involved in the film’s launch.  The next week I got an email from the publicity team who asked if I might be able to fly to New York to join journalist Tina Brown in a Women In the World luncheon and Q&A about the film. That afternoon, I was asked if they could extend  my trip to NYC so that I could MODERATE a luncheon with the cast and David O Russell for AMPAS (Academy Motion Picture Arts and Sciences = the OSCAR people).  I felt like I’d just won the lottery.  So of course, off I went! 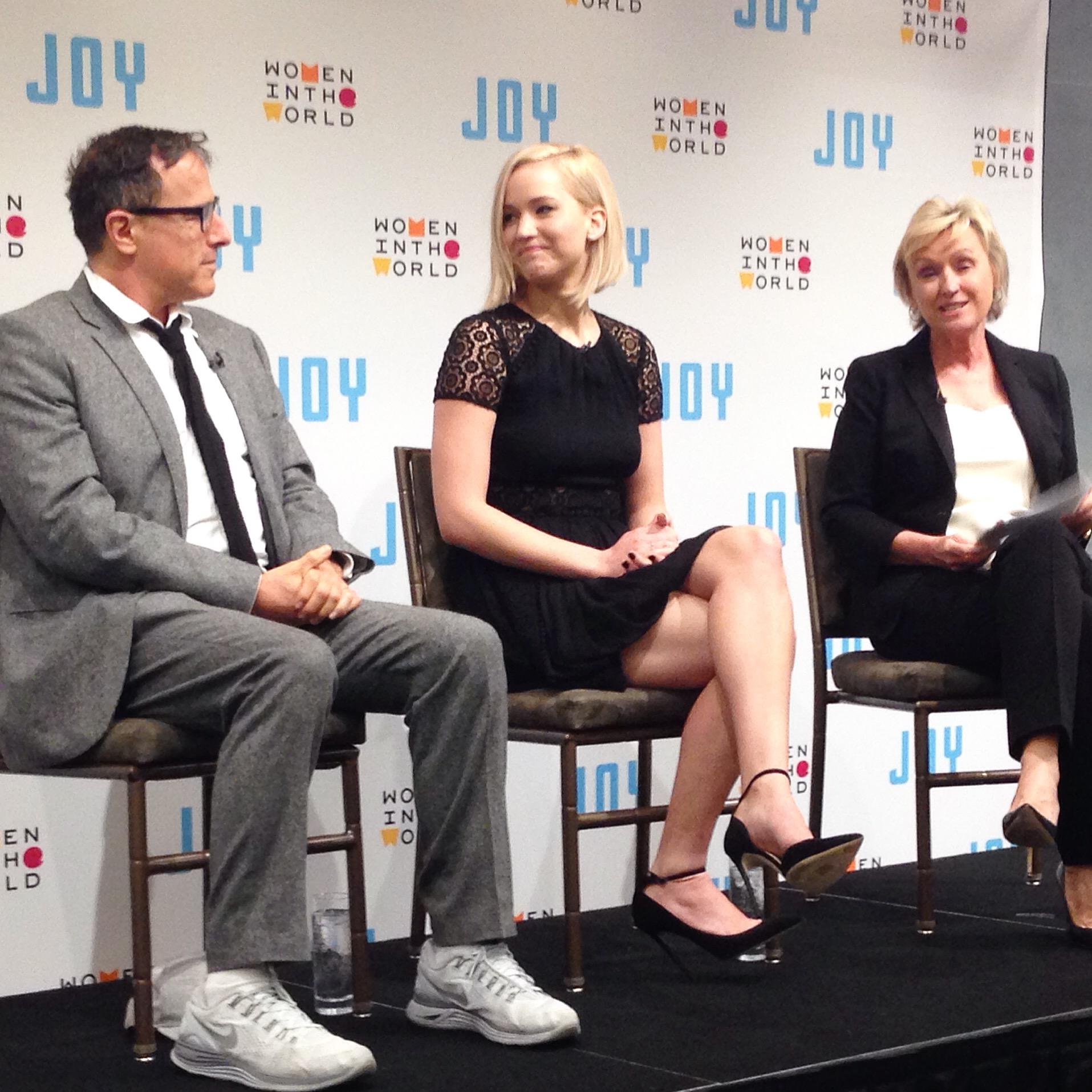 The Women In the World luncheon was to be a conversation with David O Russell and Jennifer Lawrence moderated by Tina Brown. When I arrived, I met some other entrepreneurs – one who was about to launch a special paper she had invented to keep vegetables fresh longer, another who was working in the digital realm  – but it was hard not to notice that Gayle King, Maureen Dowd, Paula Zahn and other notables who were in the room.  This was a serious powerhouse of women.  A VIP network of movers and shakers that I was asked to join.  When the Q & A began,  Tina Brown READ MY LETTER.  She read my letter to the crowd of VIP women who were audibly moved.  I couldn’t believe it.

The panel was engaging and inspiring. Jennifer Lawrence seemed real, grounded and professional but approachable.  David spoke with enthusiasm about the story being like Cinderella, without a prince. He offered insight into the characters and I loved getting the inside scoop.

But the highlight for me was meeting the real Joy Mangano and her daughter Christie. They both hugged me and when we spoke, they understood the challenges we (my business partner Sam and I) face and offered to speak with me more.  I recognized this as a golden opportunity. 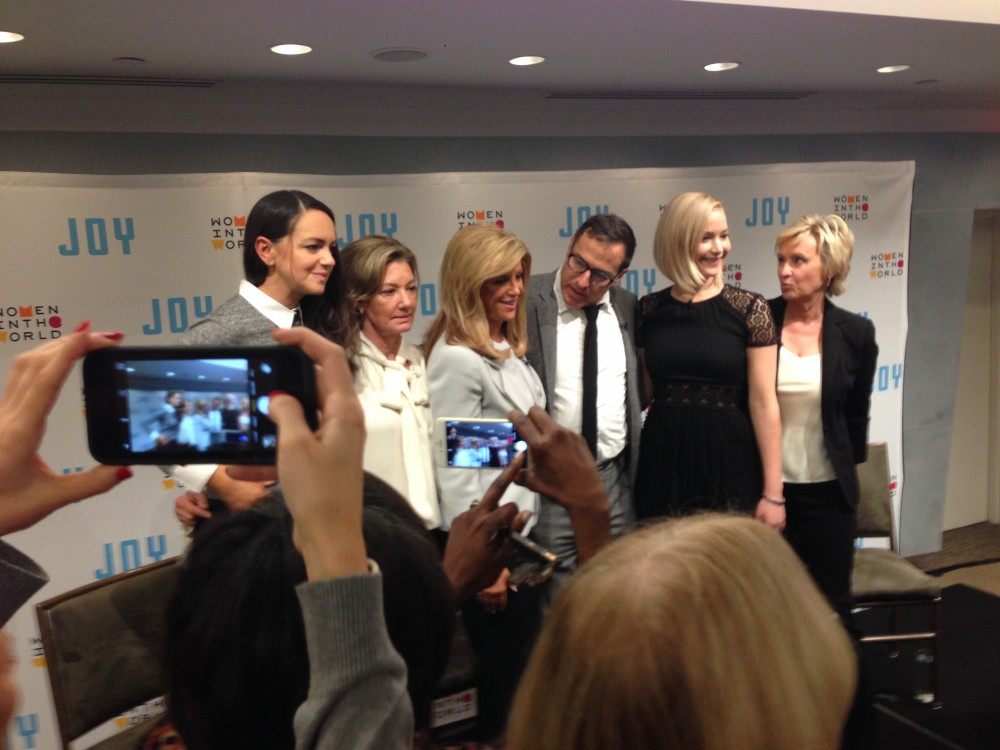 At the end, FOX publicity invited some of the women in the room to share moments in which other people believed in us, before we believed in ourselves.  I told this story:

Joy took care of her parents, raised two children, worked a stressful job, had a big idea for a product and put everything EVERYTHING against that big idea to make it happen, lost it all (several times) and kept going.  And so did I.  So do I.

That evening, I was invited to attend another screening of the film. The first time around I experienced the film purely from my perspective – how it related to my life.  But the second time around, I saw the cinematic references to Citizen Kane, It’s a Wonderful Life, and The Godfather – and all the embedded symbolism. The extraordinary choices that the director made – and of course – the wonderful performance by the entire cast but especially Jennifer Lawrence.  This scene really stuck with me:

At this moment, Joy has to talk her way back from failure. She has such conviction in her product. Neal (Bradley Cooper) doesn’t want to give her another chance, but she’s there and she’s talking him into it. This scene speaks to the tenacity that we must all muster in the face of defeat.  These are the moments in the life of an entrepreneur that define us.  Actually, these are the moments that define us as people. 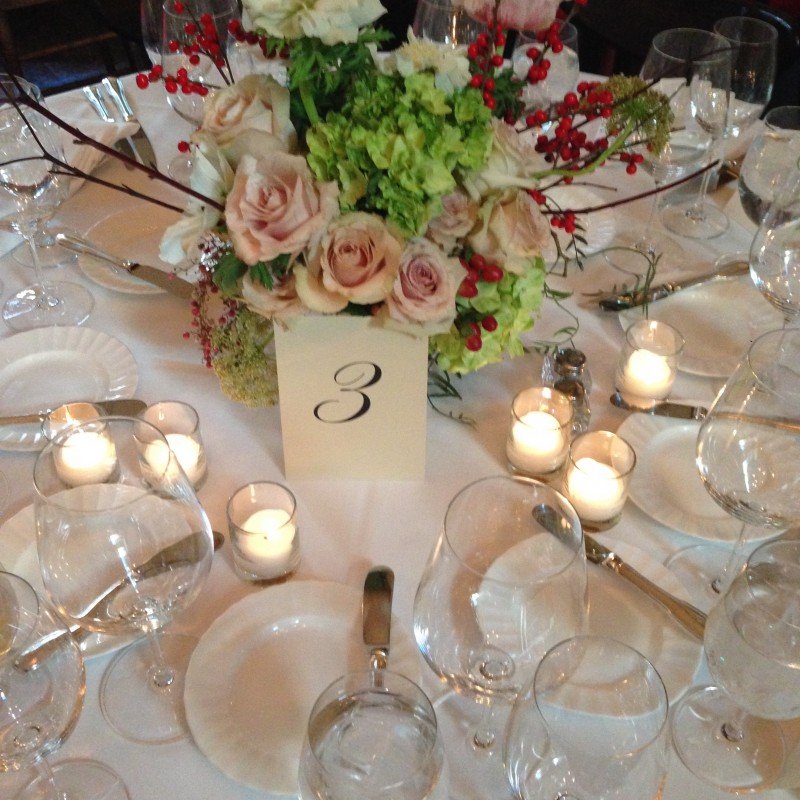 The next day was the AMPAS luncheon I was set to moderate.  It all seemed so surreal.  The cast and guests entered into the private room of the famous Le Grenouille Restaurant in midtown.  I introduced myself to them as they came in and we talked for a bit. Isabella Rossellini, was as lovely and gracious as one might imagine.  I wanted to ask her about her legendary career, working with all the great directors, being the daughter of one of the world’s great directors… Diane Ladd and I spoke about the energy of an audience, which seemed so wonderfully LA.  Though I’d never seen “Orange is the New Black” Dasha  Polanco sat next to me for lunch and we talked about women friendships (since she played Joy’s loyal best friend in the movie). Elizabeth Rohm sat next to her and was hilarious and fun.  I felt an instant bond. 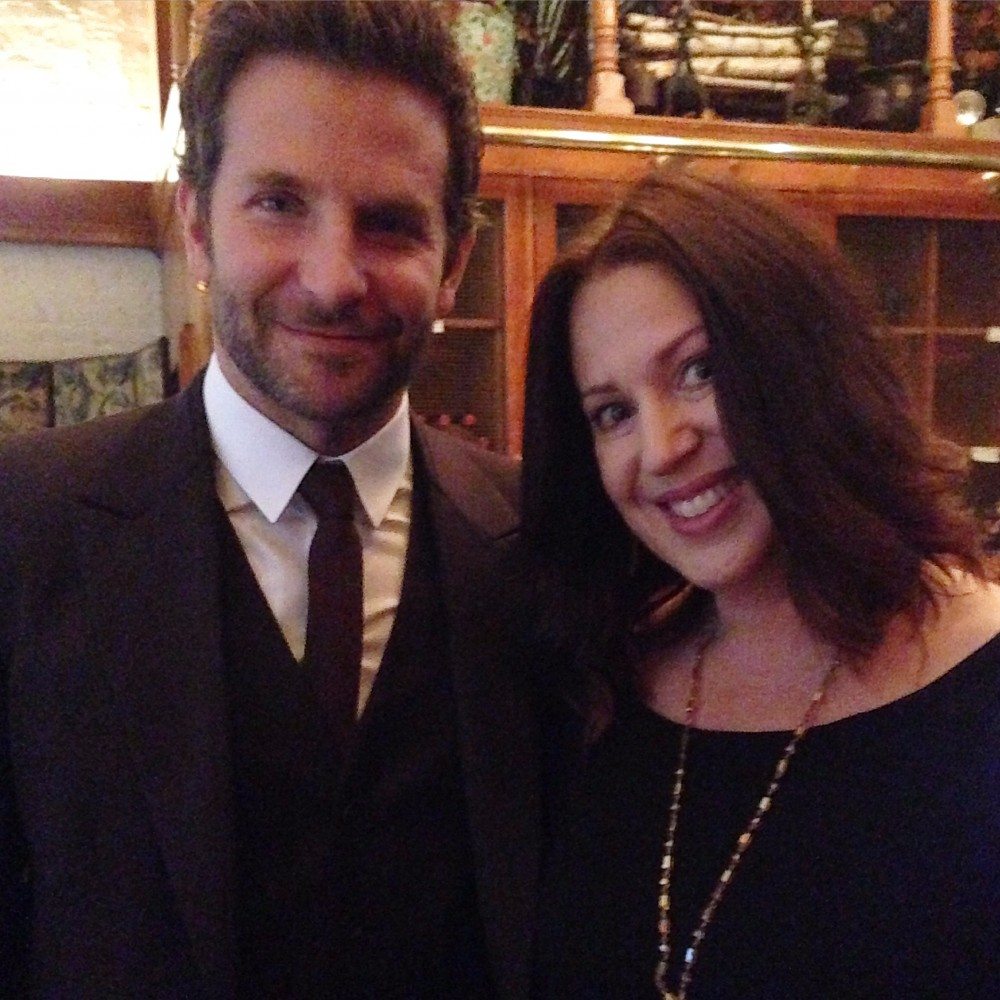 Me with Bradley Cooper

Then I met Bradley Cooper.  He’s much taller than I’d expected with the warmest hands and solid (but kind) handshake.  He looks at you and makes you feel like you’re the only person in the world. I wasn’t an official admirer of Bradley Cooper before meeting him, though I’d admired his work – but oy – when we took that picture I realized I was unconsciously trying to put my head upon his shoulder.  It just couldn’t be helped.  I was melting inside. 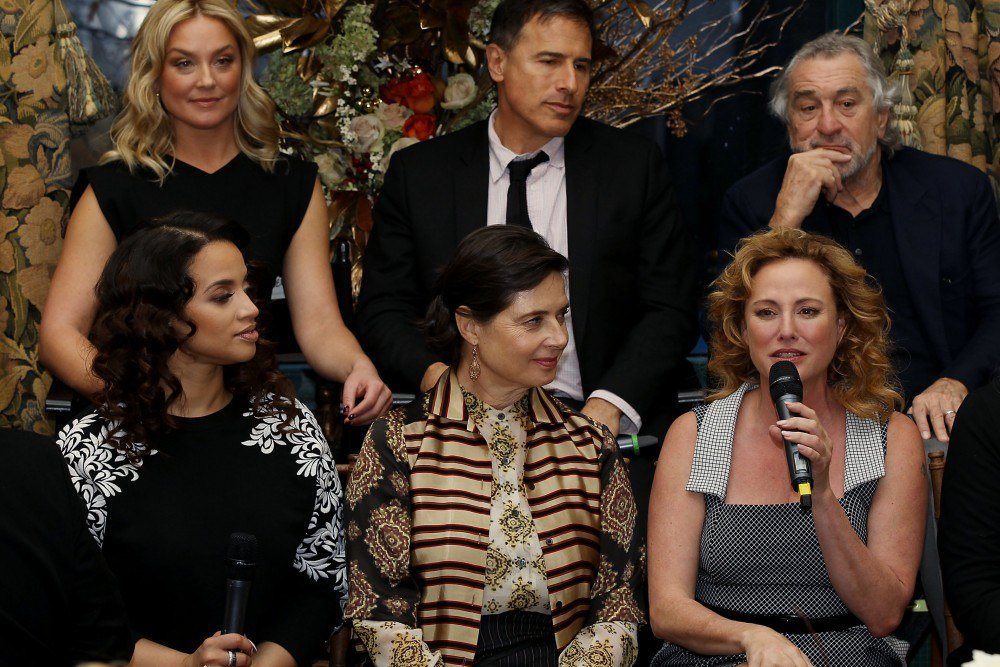 I spent the next thirty minutes asking questions to the cast. At one point, while addressing Robert De Niro, I had to ask, “Do I call you Mr. De Niro?  Robert? Bob?” (The answer was “Bob”) and the crowd laughed.  We were all in that honest moment together.  It was such a pleasure to lob questions at this legendary group of talented people; I couldn’t believe the opportunity I’d been handed…all because of a letter I’d written. 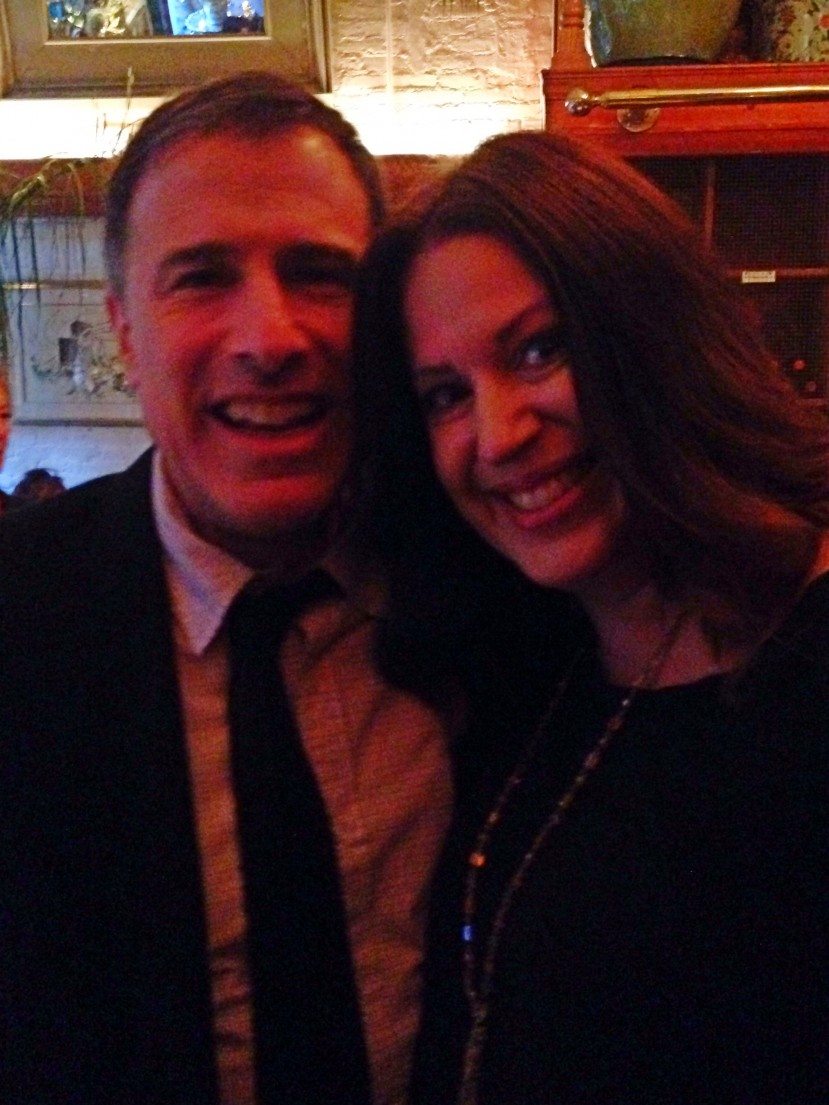 Me with David O Russell

On the plane ride home that evening, I reflected upon it all.  I couldn’t resist showing my plane seat neighbor the photo with Bradley.  It was a souvenir from the fairytale experience I’d just had.  But mostly I reflected on how the letter I’d written changed my destiny a little.  What further opportunities might it lead to?

This past year has been filled with unbelievable highs and incredible lows on our quest to achieve great things for The Mother Company.  Building a brand is hard yet it all looks so easy to achieve… on paper.  The struggles are romanticized or glossed over. Every time I see a cute “inspirational” little graphic on Instagram or Facebook with a saying like “The only thing standing in the way of your dreams is you,” I want to punch someone. Truth is, there are SO many things standing in the way of you achieving your dreams:  money, connections, timing, children, unsupportive friends or family, other more pressing obligations, being in the wrong location, lack of legal power – I could go on.  But then, in the midst of your struggles, you write a letter (or put yourself out there) and something magical happens.