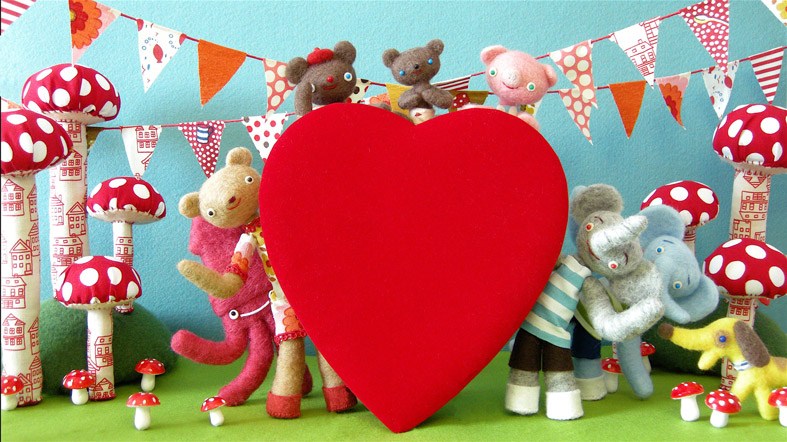 (In the Garden Theater segment from Ruby’s Studio: The Friendship Show, these little bugs learn an important lesson about empathy.

An interview with Dr. Lawrence Shapiro

On a microcosmic scale, the other day, my three year old refused to nap — but not me. Succumbing to the weight of my drooping eyelids, I began to doze. My young son picked up his comforter, laid it over me, and tucked in his baby-scented infused blanky too. (Then he stealthily left the room.) But, his act of empathy made-up for his bold get-a-way! The Mother Company is all about raising good people. Dr. Lawrence Shapiro, child psychologist, says nurturing empathy is key to that worthy goal. — Laurel Moglen, Managing Web Editor, TMC

Are children born empathetic, or is it taught?

We are born empathetic.

We measure empathy by the willingness of one species to raise another species. Many researchers believe there is an empathy gene, actual DNA, making kids more or less empathetic. Interestingly, rats, out of all animals, are the most empathetic in the animal kingdom. Rats will raise anything – cats, chickens, etc.

Children, as young as two, and certainly three exhibit empathy in recognizable ways. For example, they might see their dad with jelly on his face, and wipe it off, or lay their blanket on a resting parent. Beyond empathetic behavior or actions, there are also empathetic emotions and thinking. It is difficult to scale a child’s capability for emotional empathy, or rather the inclination to feel what the other person is feeling, but research points to there being a wide range of intensities for this trait. Empathetic thinking, or the ability to contextualize intellectually the perspective of another person, comes later. Empathetic emotion, behavior, and thinking have different timelines and milestones in regards to a child’s development.

Empathy can be unlearned. We see this in five-year-olds when they tease other children or call them names. In fact, more than any other inborn quality, empathy is the easiest to lose.

How can parents maintain it?

Parents are the teachers of emotional intelligence. But, as I intimated above, parents need to keep in mind that all children are different when it comes to their capacity for empathy. Some have a natural inclination, others not so much. So much of maintaining empathy is cultural. Our modern-day culture of violent video games and television, intense competition, etc do not help to foster and maintain empathy in our children. That’s where good parenting can play a huge role in keeping up, and even growing empathy in their children.

In contrast, the Hopi, a Native American tribe, has a cultural imperative that says everyone is interconnected. So, if one person is hurt, everyone feels that pain. But by and large in the US and western countries, while empathy exists, it’s not part of mainstream teaching at home or at school.

At what age does empathy kick-in?

As early as nine months, or possibly earlier. But, at around nine months, we can see empathetic behavior exhibited towards close family and pets – loved ones within literal reach.

What are some red flags that indicate kids are lacking in empathy?

Typically, empathy is the overriding quality that drives good behavior. It could be fear as well. But most times, it’s empathy. No child is perfect, and all children will display behavior that is not empathetic. But when you have a child that chronically:

parents need to take a closer look at their child. All this behavior points to a child that is not seeing their parents (for example) as people that love and care for them. What’s really telling is whether or not the child feels remorse or responsibility after s/he has done something to hurt another (whether in words or deed). That said, the emotion of remorse does not develop until age five or so. Before that, young kids just don’t have the emotional maturity or perspective.

Two or three percent of children appear to be born without the natural inclination towards empathy that other children have. When they grow up, these children might get labeled as sociopathic or narcissistic, and it is not clear whether early intervention can help these children. Children with autism are a special case. Their inability to understand and relate to others is part of the definition of this diagnosis, but from a neurological standpoint, this is a much more complicated developmental problem.

There’s also impulse control that can be confused with not being empathic, but it’s a different issue. Again, the question is how do they feel after they’ve hit, kicked, or had an outburst. If they are at an age and maturity where they can feel remorse, that’s what parents should want to see.

The good news is empathy can be relearned and taught to most kids.

How does empathy help kids both in the short and long run?

Simply put, empathetic people are well-liked because they are “socially intelligent”. When people are well-liked, their self-esteem grows, and their character builds from there. For example, people who feel appreciated and liked, tend to be physically healthier because they feel like they matter, and want to take care of themselves. A socially intelligent child gets more positive attention from his teacher and then gets better grades. Later in his career, this same person finds it easier to navigate the social nuances of the workplace and is likely to be a better employee, manager, or CEO.

From a social, workplace, and academic perspective, empathy, at its essence, serves to bond people. Everything pivots around empathy.

Lawrence E. Shapiro, Ph.D., is an internationally recognized child psychologist in Norwalk, CT, with over twenty years of experience in psychology and publishing. He is the founder of Instant Help Books and author of over fifty books, including Learning to Listen, Learning to Care and Let’s Be Friends. Shapiro is well-known for his ability to help children develop better emotional and behavioral control using innovative, therapeutic games and books.

The Mother Company is on a mission to Help Parents Raise Good People. We do this with our children’s Emmy-winning television series, Ruby’s Studio, a series of preschool and early educational picture books, free teacher guides, music and more, all about social and emotional learning, and with TellStella, a digital service that connects parents to parenting experts via text and talk for one-on-one support and guidance around all parenting topics for kids 0- 18+

This article was originally published Feb. 5, 2015