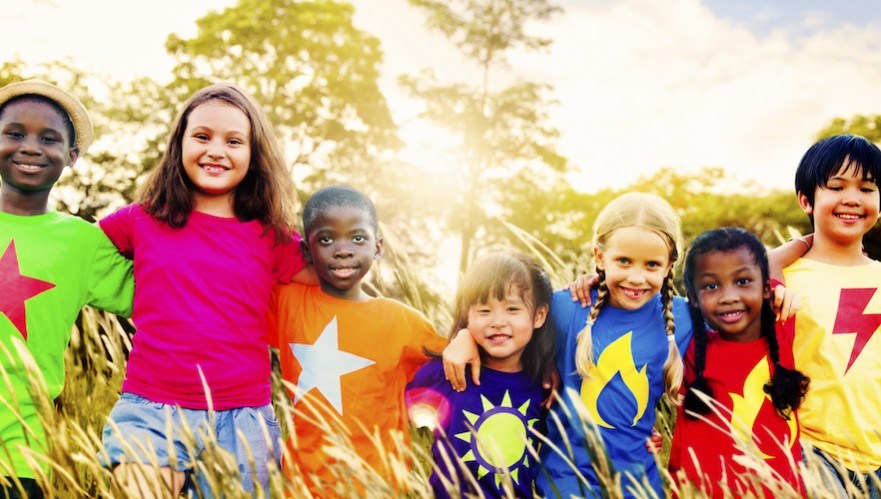 Some of the most wonderful moments for me as a parent stem from the innocent questions that my children ask me about the world around them. Questions about things I unwittingly take for granted, or often prefer not to think about. And by far, the hardest ones to answer are questions about the differences between people. Why are some people poor and some rich? Why do some people go to Church and some people go to Synagogue? Why is my skin this color and that person’s skin another color? When faced with these questions I am further awakened to the world around me and eager to delve in with my kids, but I often find myself stumbling. How can I give them the information they want without burdening them with my own judgements, and why do I even have these judgements? I want my children to accept people who are different from them. And not just learn to be tolerant, but loving and inclusive. This year, in honor of Martin Luther King Jr. Day, I spoke with Dr.Christy Tirrell-Corbin – an expert in early childhood development and issues of race and culture – to find out how to talk to children about the various types of difference that surround us all.

Most parents want their children to grow up to be not just tolerant, but also accepting of others. However, it seems like many adults are nervous to discuss the topic of diversity and difference with their kids. Why do you think that is?

Parents are nervous because they don’t have a lot of experience discussing diversity. Very few parents have experienced those discussions with our own parents. Growing up, I never talked with my family about differences in terms of race or ability. It just wasn’t discussed. The research shows that parents think that if they acknowledge differences they will promote discriminatory behavior, but the opposite is true. Fundamentally it’s a fear of being perceived as racist, homophobic, etc; a fear of not really knowing how to discuss the issue that causes parents to avoid such discussions.

For example, if a child says, “Why is that person in a wheelchair?,” we tend to “shush” them because we are embarrassed and probably are unsure about the best way to respond. But a child is observing differences all the time and from a very young age. When a child makes such an observation, a simple clear cut explanation is what is needed. For example, “that person is in a wheelchair because that person is either unable to walk on his own or has difficulty walking on his own and needs that chair to get around,” is the kind of approach that helps children to not be judgmental.

Is our children’s awareness of and reaction to differences in people a product of nature or nurture?

Children do notice the differences in people and they are naturally curious, but what they do with that in large part depends on how they’re socialized. So if there is a negative reaction to their observation of a difference, they’re going to think there is something wrong. Moreover if a child makes a negative comment about someone and the parent doesn’t address the comment–that parent is at least passively endorsing such behavior. We do know that children who are in more diverse schools are more inclusive. Children who have friends that are different from them – socio-economically, racially, religiously – those children are more accepting.

Is it ok to seek out people to bring into your life just based on trying to expand your child’s cultural awareness?

I would say no, it’s not ok to seek relationships with certain people in order to expand cultural awareness for your children. To broaden our own horizons and broaden our view of the world, to have more diverse friends and more diverse experiences can really be beneficial. But the idea of bringing more diverse people into your world for the sake of your child, which sounds like tokenism, that makes me feel uncomfortable. In those settings in which you make friends as an adult or as a parent, are there others that you might embrace so that your view of the world and their world expands? Maybe a better way to frame it is to think about ways to get out of one’s own bubble, to be more aware of and embrace differences, and in doing so you would model that for your child.

There’s a lot of news out there right now that relates to issues of racial conflict, immigration, differences in religious beliefs. Should we wait for our children to come to us with questions about difference or should we bring up the subject ourselves?

I think one should always look for opportunities to address the topic of diversity and tolerance. It’s important for parents to look to their immediate surroundings to expose children to diversity. When I think of diversity, I think of it very broadly defined — religious diversity, racial diversity, diversity in terms of ability and family configuration. For example, there are people with disabilities everywhere – there are no socioeconomic or geographic boundaries there. Talk about how some people are able to do certain things and others are able to do something else. Talk about religious beliefs – so and so believes this, our family believes this, but fundamentally we all believe x,y and z. In essence we should look for opportunities to call attention to the differences that do exist in a positive way. And then, which admittedly is more superficial, go to children’s museums, attend cultural festivals and events, and read children’s books where the characters are diverse.

Is there some way that a parent of a child who is a minority – or is different from her peers – can bolster her sense of identity and confidence?

Opportunities to try to expose your child to others who look like him or her or have the abilities or disabilities through multiple means is very important. As I mentioned earlier, the superficial method would be books, movies, tv shows, but promoting diverse friendships, as well as going to cultural and community events can also be really helpful.

If you look at the research, particularly on race, what we know is that by and large African American parents talk about race far more than white parents. This is because many of them have experienced racism and many are very concerned about how their children will be treated in the world.  As a result, they call a lot more attention to race and racism and have discussions around the issue. I believe there is a lot other families can learn from that approach.

If your child is different or a minority in his environment, should a parent try to help the child to “fit in” with the majority?

Fundamentally we want to promote respect, tolerance and acceptance in our children. In addition to modeling those behaviors, parents should encourage and foster diverse friendships. One simple way to do this is to invite all the children in the class to your child’s birthday party. Another strategy is to facilitate play groups with other children who differ from your child as well as those who are more similar.  If your child or your child’s friend brings up ways they are different, acknowledge (and celebrate) those differences in a respectful manner and encourage your child to do the same. Finally, ask your child’s teacher what he does to promote diverse friendships in the classroom.

What do you do if your child unintentionally says something wildly inappropriate or a hurtful comment in front of someone who is different than them?

The most important thing a parent can do is to respond in the moment and not shush or reprimand the child. If you say “don’t say that” then it implies that there is something wrong. Respond with an objective, calm, non-judgmental explanation.

If parents want to approach the subject of tolerance and difference with their children they really need to think through their beliefs and how they navigate this issue themselves first. Some of us may think we are tolerant of difference, but it may be that we don’t always behave accordingly. We need to ask ourselves, what is our comfort level in taking someone on? If you look at the research it’s very clear that if as an adult you allow people to say racist things or homophobic things in front of children then you are passively endorsing that behavior and those beliefs.

It can be a little scary to speak up to someone who is saying something offensive in front of our kids, especially if it’s someone you know and trust. What can we say without creating a scene or an uncomfortable situation?

One could say, “In our family we really work hard to show respect for everyone so please refrain from making such comments in my presence.” That way you’re not pointing fingers or labeling anyone a racist, you’re just stating your family’s position. Some people may get very defensive, but if you approach it in this way, people are more likely to be respectful.

Ultimately, there is no such thing as perfect parenting, but the idea really is to make the effort and to model this respectful approach to diversity. It is also important to acknowledge when you make mistakes. It’s even ok to say, “When I was growing up, no one ever talked to me about people who are different, but I want to do that differently. I want us to respect all people, I want us to be kind to others. Sometimes I’m not going to know exactly how to answer every question, but I’m going to try my best.”

In closing, the three most important things a parent can do are:  model respectful and tolerant behavior, encourage questioning in our children and take a strengths based perspective when it comes to all discussions around differences.

Christy Tirrell-Corbin, PhD is the Director of Early Childhood/Early Childhood Special Education at the University of Maryland where she teaches a course entitled, Culture and Community Perspectives: The Diverse World of the Child. Dr. Tirrell-Corbin’s research interests focus on family engagement, notably around teachers’ beliefs and practices around issues of race and culture. She has also served as a consultant for several educational organizations, including PBS Kids and National Geographic. Follow her on Twitter @TirrellCorbin.

The Mother Company aims to support parents and their children, providing thought-provoking web content and products based in social and emotional learning for children ages 3-6. Check out our Emmy winning children’s series, “Ruby’s Studio” along with our beautiful children’s books,  music, and more.  We want to be a truly helpful parenting tool… For you!