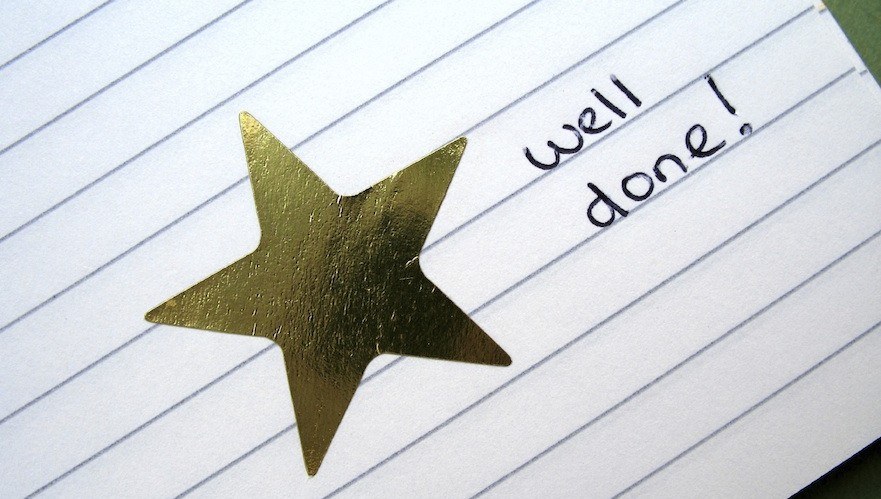 As a new mom, I set insanely high standards for myself. That included giving my kids the very best mom ever, of all time.
That didn’t seem quite so preposterous when it was just me and one rather easygoing infant at home all day. I thought I was the god of our small universe. But that illusion was as fleeting as a bubble on a baby’s lips. All the ways in which it burst would take a week to enumerate, but here are a few that make me smile.

Let’s start with the edible pedestal: nutrition. I started out as the breastfeeding, carrot straining, homemade teething biscuit mom. Preservatives, artificial flavors, and refined carbohydrates were never going to pass my children’s lips. My steep decline is best illustrated by the cakes served at each baby’s first birthday celebration: whole-grain, fruit juice-sweetened carrot cake for the eldest; a frosted chocolate layer cake made from scratch for baby #2; and a slab of sugar, food dye, and hydrogenated shortening from the warehouse club for #3. Today, I would rank our eating habits slightly better than the average American family. But back then, I would have been appalled to think I would ever call frosted wheat squares the “healthy cereal.”

Oh, the tablula rasa that was my babies’ minds. The idea of entrusting them to the institutional school system felt like handing a block of white marble to vandals with pen knives and spray paint. I would homeschool them. Our days would be filled with Latin lessons, poetry recitations, and diorama building. That lasted until I got up the nerve to enroll the oldest in a mother’s day out program two mornings a week, and realized he enjoyed the time with other adults and kids as much as I enjoyed the break. The writing was on the wall after that, and it said “Have a great day at school.”

I was never, ever, ever going to yell at my kids. I mean, what kind of mother does that? What excuse is there for not communicating with your children in a calm and respectful tone? Then my boys got older and louder, and my volume started to creep higher. Not often, but sometimes, it goes all the way up to yell. In my defense, it’s exasperated yelling, not angry yelling. Not that my younger self would have distinguished between the two. On occasion, I feel the need to apologize to a child for raising my voice in frustration. But mostly not.

I’m a chore chart flunkie. I can’t count the number of times I’ve announced a new program of accountability for chores. None of them have ever lasted past a week. I recognize that chores are important. I believe in the value of earning and managing an allowance. But tracking it just winds up being one more chore for me. I would promise myself an allowance, but as my kids have learned, I never have cash to back it up. For a while, I tried a virtual banking app that accrued their weekly earnings and debited their “accounts” when they wanted to cash in, but it quickly got out of hand. If my kids ever figure out how much we owe them, they’ll probably turn us over to a collections agency.

Somewhere in a closet, there is a scrapbook with a half dozen completed pages documenting my oldest son’s first months of life and my own good intentions to lovingly archive each milestone thereafter. The sequel to that unfinished work is contained in several bankers boxes stuffed with school papers and photographs. Sometimes I come across a baby tooth in a jar or my jewelry box. I can’t tell which ones belong to whom, or what I’m supposed to do with them now.

Thank god I have a blog. When they ask about their baby books, I’m just going to send them the link.

***
I look back over the path of my good intentions without regret. So I’m not the perfect mom I wanted so much to be. My kids think I’m the very best mom ever, most of the time. And I’m perfectly happy with that.

Kyran Pittman is the blogger behind Planting Dandelions, and author of the same titled book. She has three boys and lives in Arkansas — much to her disbelief.