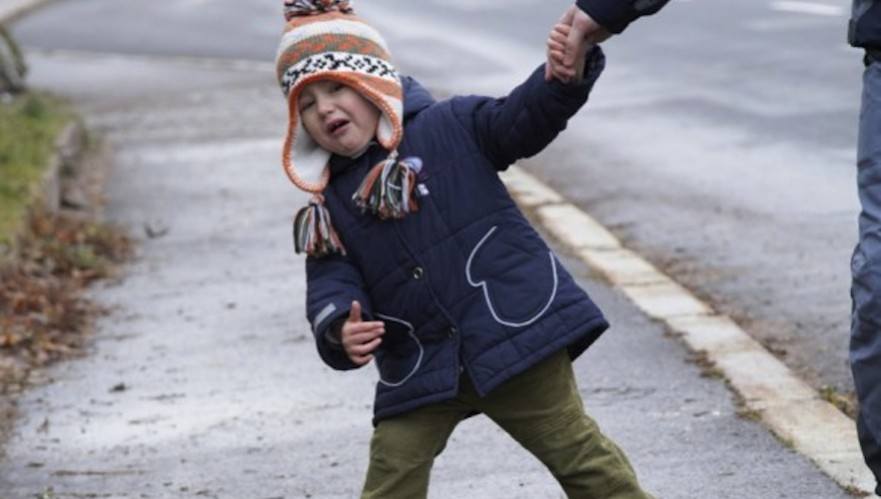 An interview with Eileen Kennedy-Moore, PhD about the struggles that happen when one child favors the other and how best to balance discipline.

In my family, I’m the “bad cop”. I’m the one who enforces the rules and manages the day-to-day schedules. This often leads to tears, battles, and fits. When my husband comes home, he’s greeted with open arms and big smiles because he is, by nature, fun. In other words, he is the “good cop”.

But it doesn’t always have to be like this, assures child psychologist Eileen Kennedy-Moore. She says that while it is natural for a child to “favor” one parent over the other from time to time, it is often a phase – one that is essential and natural in the journey of growing up to be a well-rounded adult. – Christina Montoya Fiedler, TMC Contributor

What does it mean when a child prefers one parent over the other?

Children almost always love both of their parents. When they show a preference for one or the other parent, it’s usually because they are craving a certain kind of interaction in that moment. For instance, they may need comforting from the parent who spends more time with them, novelty from the parent who is around less, or permission to do something from the parent they perceive to be the softer touch.

For two and three-year-olds, insisting on doing something with one particular parent is often about trying to control their environment and make it predictable. Children this age find comfort in things being done a certain way, whether it’s reading the same book every night or cutting their sandwiches the “right” way. Their preferences tend to be fierce, but fickle. A day, week, or month later, they may switch and favor the other parent.

Sometimes preference for a particular parent has to do with the child’s sense of identity. For instance, wanting to be with the same-sex parent may be about figuring out what it means to be male or female. It could also reflect a shared interest that’s part of the child’s sense of self, such as “Me and Mom are Yankees fans!”

Are there any long-term ramifications from this?

How can parents work as a united front to keep one parent from being the “bad cop” and the other the “good cop?” How can parents delegate their responsibilities so they are both equally responsible for a child’s discipline?

Don’t hand off discipline. “You see it; you deal with it” is a good policy for parents. Be careful not to contradict your spouse in front of your child. Unless it’s an immediate safety issue, talk out differences of opinion later, in private.

You may also need to talk with your spouse to establish rules for your children and ways of responding to misbehavior that you can both agree on. Trying to “make up for” how strict or lenient the other parent is never works. It just teaches children that they don’t have to listen to anyone.

How can a parent deal with his or her emotions when they notice their child favoring one parent over the other?

It’s natural to feel hurt, sad, jealous, or resentful when the child we love so much prefers the other parent, not us. Try to remind yourself that this preference says more about the child’s current needs or wishes than it does about you. Being the currently-less-preferred parent doesn’t mean you’re a worse parent than your spouse. In fact, having our children take us for granted to some extent is a sign that they trust us enough to know we’ll still be there for them, even if they temporarily turn their backs on us.

Don’t scold or tell your young child that she’s hurting your feelings when she wants Daddy to tuck her in, because that attaches too much weight and meaning to the preference. Be patient. Stay loving in your interactions with your child. He or she will come around soon.

You may want to alternate with the favored parent on routine tasks. For instance, you could say, “I know you like it when Mommy gives you your bath, but tonight it’s Daddy’s turn. Tomorrow it will be Mommy’s turn again.” This will probably be easier to do if the favored parent isn’t around.

You may also want to add an extra element of fun to the usual routine when the less preferred parent is in charge. If alternating is too difficult, you may want to find new ways to spend fun time with your child. There’s no one best path to closeness.

Eileen Kennedy-Moore is a New Jersey-based clinical psychologist and author of books and articles on children’s emotions such “What About Me? 12 Ways to Get Your Parents’ Attention (Without Hitting Your Sister).” Her main focus is dealing with children’s feeling and friendships and how to parent to maintain healthy relationships with our children.

The Mother Company aims to support parents and their children, providing thought-provoking web content and products based in social and emotional learning for children ages 3-6. Check out the first episode of our children’s series, “Ruby’s Studio” along with our beautiful children’s books, music, and more. We want to be a truly helpful parenting tool… For you!

This article was originally published October 18, 2012