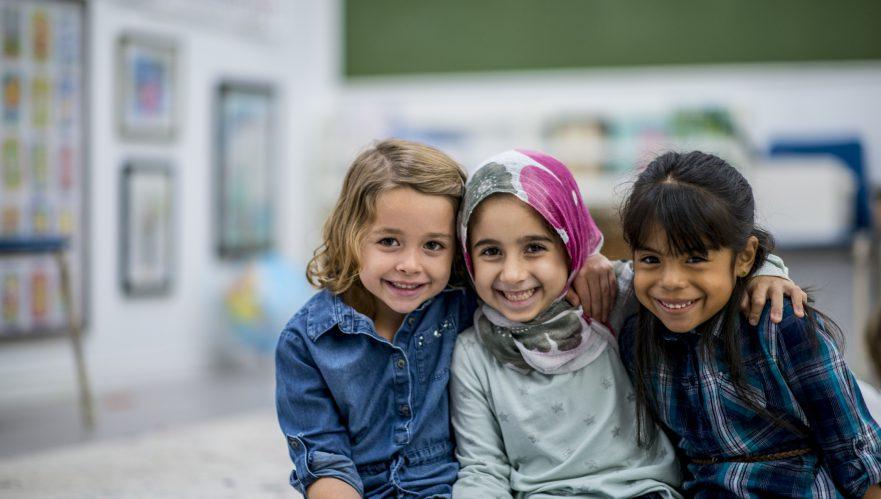 As we raise our children in today’s increasingly interconnected world, it is important that we teach them to have a global perspective. Helping children become internationally minded will in turn help them grow to be kind, empathetic and productive members of society. They will  have a broader sense of the world and others living in it.

Without diversity, there is no barometer from which to observe one’s own culture. Children will begin to appreciate diversity, but we as parents must be the role models. We must show them that people around the world have different perspectives. Early childhood is the ideal time to start global education, as children are open-minded and curious. I firmly believe that by raising culturally competent children, we bring our children one step closer to a more peaceful planet.

Cultural competency may seem like a big term to describe a way of raising young children.  But it is simply defined as the ability to interact with and respect people from different cultural and linguistic backgrounds. Being bilingual is part and parcel of being culturally competent. When a child learns another language, the brain is forced to think in new and different ways. He is more apt to be accepting of another culture. Our melting pot has created a beautiful linguistic society, where it is much easier to speak and practice other languages.

In fact, 33 of the 50 States, have adopted a Seal of Biliteracy, which is an added distinction on a high school diploma for qualifying bilinguals. Language is a skill that we can teach our young children today and will yield big results for them in the future. As parents we want the best for our children.  In today’s age that means giving them every possible advantage for success so in the future they can function in our global society. Being able to navigate other cultures through language is our best gift to them.

The good news is that teaching cultural competency is easy, affordable and fun! It could start as simply as hanging a world map in your child’s room, playing world music or spinning a globe together to discover the many countries of the world. It will quickly show your child that there is more to life than the community in which she lives.

Introduce your child to another language. There are many ways to do this, from children’s language apps to foreign cartoons and movies. You can also create group play dates for children with language instruction

Visit the library and choose books about kids or stories from other countries and cultures. Children love to learn about other people their own age, such as what they eat, where they live, how they study and what games they play.

Play music from around the world, which will help your child hear different sounds and language. So much of a country’s culture is tied to the arts.

Encourage your children to share their heritage and explore those of their friends. Create a multicultural cookbook through school or a mom’s group.

Explore cuisines of the world with your children. Whether at a restaurants or a specialty section of a super market or Trader Joe’s, we can enjoy much of the world’s food at our fingertips.

Caryn’s mission is to see that our future generations become multilingual and globally aware.  Caryn works with underprivileged schools in the United States, including the LAUSD Mayor’s Partnership Schools and has created language workshops for LAPD PAL (Police Activities Leagues) and LA’s Best in the Los Angeles area. In 2013 she partnered with a private trust to bring the Early Lingo English Language Learning Initiative to Fiji.  She is working with organizations in the South Pacific to bring the English language to school centers in the region. She has recently partnered with independent schools along the East Coast who use the Early Lingo Language Learning Apps. Early Lingo also works with various foundations that serve to improve early childhood education for disadvantaged children.

On a global scale, Caryn has created The Young Global Citizens Campaign, which educates children on how to become kind, responsible and productive members of society in our increasingly interconnected world.

Caryn speaks five languages, is a member of the World Forum Foundation, sits on the Advisory Board of Global Chamber and is a Global Citizen Resource Group Chair at a CT independent school. She resides in the greater New York area with her family.

Make sure to check out Kinderwagen Test 2019 Summer Language Challenge where they post a word of the day and a chance to win prizes.  Beat the summer slide and encourage kids to learn a new language.  Click here for more info.

The Mother Company aims to support parents and their children, providing thought-provoking web content and products based in social and emotional learning for children ages 3-6. Check out episodes of our Emmy winning series “Ruby’s Studio” children’s video series,  along with our beautiful children’s books, music, and more.